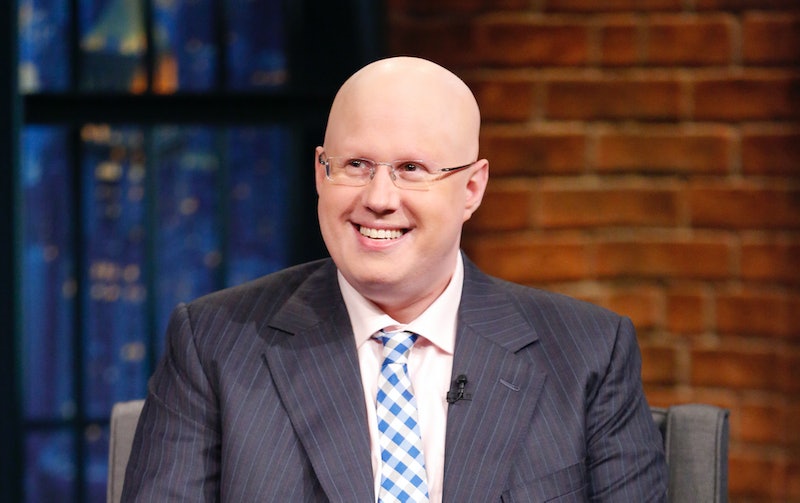 The comedian and actor, who is best known for his work on TV and radio with long-time collaborator David Walliams, will replace Toksvig as the new co-presenter of Channel 4’s hugely popular baking show. Toksvig has presented the show since its move from BBC three years ago, but said she was stepping aside from her partnership with Fielding to focus on other projects.

Speaking about the exciting news, Lucas told Channel 4: “I’m chuffed to bits to be joining the most delicious show on television. I can’t wait to break bread with Noel, Prue and Paul and meet the brilliant bakers.”

He continued: “And bearing in mind my love of cake, I’ve already ordered some much larger trousers in anticipation. See you in the tent!”

Over on Twitter, the comedian continued the celebrations by sharing a throwback picture of himself as weight loss group leader Marjory in Little Britain. Carrying a tray of cakes and buns, Matt captioned the snap: “Mood,” which we can definitely relate to.

With filming for the 11th (yep, 11th!) season of Bake Off beginning this spring, we’ve been eagerly awaiting news of Sandi’s replacement and thanks to a video Channel 4 shared of Lucas and Fielding’s screen test, it seems like the latter may have found his match, with the Mighty Boosh star cracking up laughing at Lucas’ jokes.

Meanwhile, the rest of the GBBO team seemed equally as excited to have Lucas on board, with judge Prue Leith tweeting: “So excited to be working with @RealMattLucas, the combination of him and @noelfielding11 , will we stop laughing long enough to get any filming done??!!!”

Even famously steely judge Paul Hollywood seemed hyped by the announcement, writing: “I’m a genuine fan of Matt’s, he’s a fantastic addition to the team and I can’t wait to start working with him.”

More like this
Vanessa Bauer Is Reportedly Dating Her 'Dancing On Ice' Partner
By Darshita Goyal
Spencer Matthews’ Impressive Net Worth Expands Far Beyond Chelsea
By Sam Ramsden
Charlotte Crosby’s Net Worth Shows How Far She’s Come Since 'Geordie Shore'
By Darshita Goyal
Barney Walsh Has Been Linked With This Famous Miss World Winner
By Sophie McEvoy
Get The Very Best Of Bustle/UK
Sign up for Bustle UK's twice-weekly newsletter, featuring the latest must-watch TV, moving personal stories, and expert advice on the hottest viral buys.