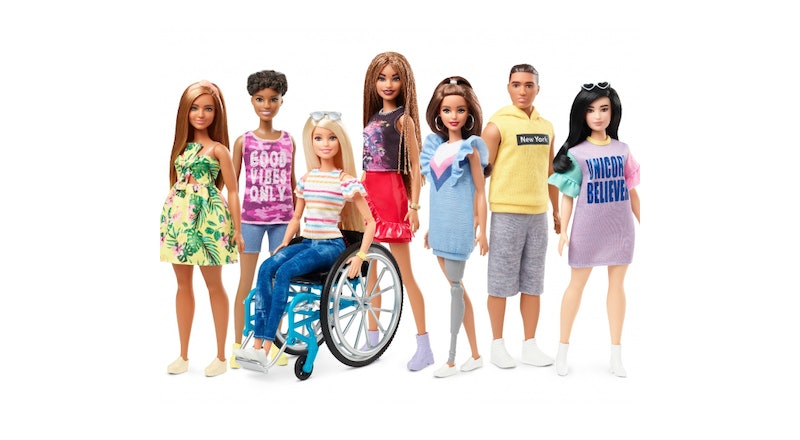 Barbie fans are finally getting what they’ve been asking for all these years. Mattel is launching Barbies with physical disabilities, CNN reports, a move that brings some long-awaited representation to the 60-year-old doll line. In June, Barbie will debut one doll with a prosthetic leg and another in a wheelchair, according to CNN. And Barbie’s DreamHouse is getting an update, too, says CNN, adding a new wheelchair ramp so Barbie can access her iconic home. The additions are a part of Mattel’s 2019 Barbie Fashionistas Line, which is all about offering kids (and, you know, Barbie fans in general) more diverse representations of beauty, CNN reports.

"As a brand, we can elevate the conversation around physical disabilities by including them into our fashion doll line to further showcase a multi-dimensional view of beauty and fashion," Mattel said in a statement to CNN.

A doll with a wheelchair has been one of the biggest requests from Barbie fans, according to USA Today. This doll will have an articulated body so she can easily sit in her wheelchair, says USA Today, but other dolls in Mattel’s Made to Move line can also use the wheelchair. And it was super important to Mattel that these dolls represent disabled people correctly, so they worked with a team at UCLA Mattel Children’s Hospital to create the wheelchair and 13-year-old disability activist Jordan Reeves to design the prosthetic limb, according to CNN.

The team at UCLA helped Mattel design a wheelchair that was representative of a specific disability experience. "While there are many types of wheelchairs, this chair is modeled after one that is designed for an individual who has a permanent physical disability," Mattel said in a statement to CNN.

"That was one of our first big ‘ahas,’" Kim Culmone, Mattel's vice president of Barbie Design, told Teen Vogue. "That’s not necessarily something we would have realized how important it would be to someone living with this experience."

Disability rights activists say this kind of representation is pretty major. Curt Decker, executive director of the National Disability Rights Network, told CNN that it’s symbolic that "a big icon of society like Barbie now demonstrates or shows that there are different types of people ... [who] can be attractive and something kids want to play with.” And Mattel isn’t stopping there. The 2019 Fashionistas line will also include even more representations of beauty, says CNN, including braided hair textures and even more body types, such as smaller busts, less-defined waists, and more defined arms.

In other words, Barbie continues to look more and more like you and me instead of the one-note blonde, blue-eyed, one body-type option (which isn't to say blonde hair and blue eyes isn't totally gorgeous, too). The world has come a long, long way since it’s defined beauty the way it did when Barbie first came out in 1969, and it’s super cool to see Mattel trying to keep up with what the world actually looks like.