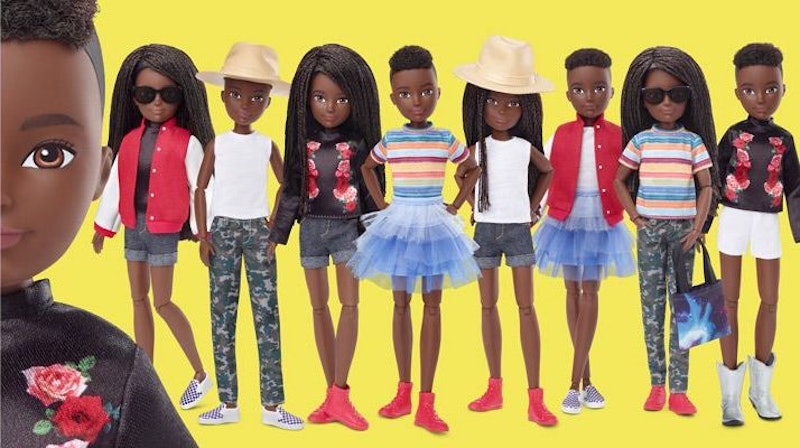 Toy companies have spent decades selling dolls "for girls" and cars and trucks "for boys." But now, Mattel is releasing a line of dolls that is sure to make your non-binary heart leap with joy. Mattel's new Creatable World line features gender-neutral dolls of color that come with customizable hair and an array of fabulous fashion options.

Designed to be dolls that "are as limitless as the kids who play with them," Mattel's website says that the Creatable World line is meant to "keep labels out and invite everyone in — giving kids the freedom to create their own customizable characters again and again." These gender customizable dolls are sold in $29.99 kits that give all children the option to gender and style their doll however they want.

"Mattel’s new line of gender inclusive dolls encourages children to be their authentic selves and is the latest sign that toys and media aimed at kids are expanding to reflect how diverse children and their families actually are," GLAAD CEO and President Sarah Kate Ellis tells Bustle. "So many children and parents never saw themselves represented in toys and dolls, but this new line raises the bar for inclusion thanks to input from parents, physicians, and children themselves."

These dolls also represents non-binary folks who aren't white and androgynous or masculine, which is so often the default representation of non-binary folks in media. Instead, these dolls include Black, Latinx, and Asian gender nonconforming children with various skin tones. And while all the dolls have short hair by default, they all come with luxuriously long wigs so that kids have the option of styling them in a wide mix of ways.

For non-binary children of color in particular, these dolls have the potential to be especially powerful. In 2018, many non-binary people of color took to Twitter using the hashtag #NonBinaryIsntWhite in order to disrupt the overwhelming whiteness and masculinity of non-binary representation in the media. So to find gender-neutral dolls with an array of skin tones and hair styles is a breath of sweet relief.

This is especially so considering that representations of gender nonconforming children, especially children of color, are likely to be enmeshed in pain and tragedy. According to a 2015 study published in the Journal of Homosexuality, gender-diverse preadolescent children are most often depicted in visual media as having extreme gender dysphoria and suffering (or mired in controversy) because of it. Having dolls that they can identify with might well make it easier for children of all genders to associate their gender explorations with joy, rather than with strife.

Sure enough, these are the dolls I wish I'd had as an eight-year-old non-binary trans boy. These are the dolls that would have shown me that my options are endless and that I could be just as stylish, just as valid, no matter what my clothes and hair were doing. While the Aladdin doll I got when I was four felt more like me than the Barbies I'd grown up with, I wish I'd had options that showed me that there wasn't just one way to be.

Still, the Creatable World dolls are only available in one body type, which may be reminiscent of Barbie's singular, unrealistic body type. Though these new gender-neutral dolls are meant to have prepubescent features, they still lack the diversity of body shape that Barbie's newer "curvy" doll might offer. And many young girls identify with these "curvy" Barbies, according to a 2019 study published in the Public Library of Science Journal, which has the effect of offering girls a positive interaction with bodies that look more like their own.

This sense of identification is one that mainstream dolls have historically denied many children, including the gender nonconforming children of color that this new line might appeal to. And while these new Creatable World dolls aren't perfect, they might offer gender non-conforming children of color (not to mention adults) the chance to truly recognize themselves in a doll for the first time. This is especially important, given how deeply representation matters when you're learning to love yourself. And this journey to self-love is what playing with dolls should really be about to begin with.

More like this
The Best Memes & Tweets About The Discontinuation Of The Choco Taco
By Alexis Morillo
I Tried The $20 TikTok Viral Oishii Strawberries — Here's What I Thought
By Sophie Hanson
What Does POV Mean On TikTok? The Popular Acronym, Explained
By Emma Carey
Here’s How To Get Verified On TikTok
By Emma Carey
Get Even More From Bustle — Sign Up For The Newsletter