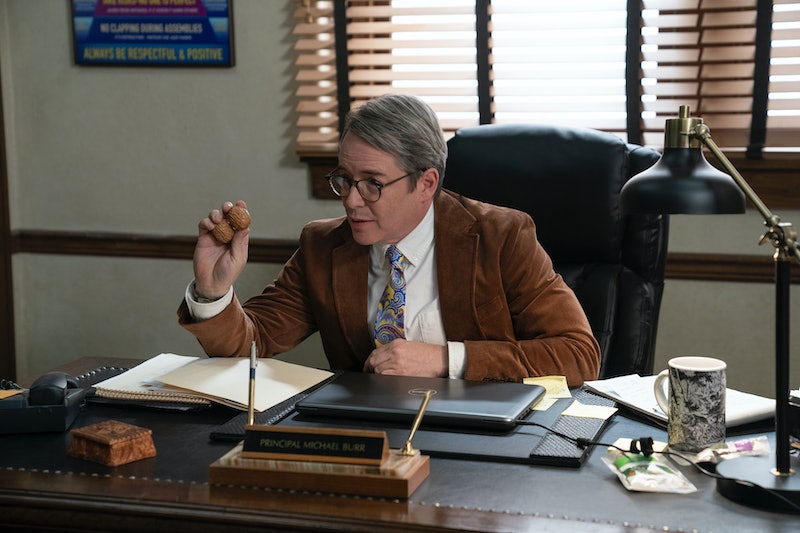 Broderick was just 23 when he played the titular lead character in Ferris Bueller's Day Off, and his portrayal of the clever slacker soon became a pop culture mainstay. Viewers are meant to root for the fourth-wall breaking Ferris as he fakes sick in order to have an epic day off from school, while his Dean of Students, Edward R. Rooney, spends the whole film trying to catch him in his own lie to increasingly hilarious results. Ferris is as wily and easygoing as Rooney is uptight and law-abiding, and in a teen comedy it's easy to side with Ferris and see Rooney as a wet blanket.

In Daybreak, though, Broderick isn't quite the 20-something he once was, and he's notably one of the only adults in the teen-centric show. It's expected, then, that Broderick isn't going to be the Ferris anymore — that honor goes to Colin Ford's Josh Wheeler, who often breaks from the action to speak directly to viewers. Instead, Broderick is the adult influence in Glendale High.

"The character I play is a little Rooney like, [but] a lot of interesting things happen to me later on," Broderick told Entertainment Weekly at New York Comic Con earlier this month, hinting that Principal Burr is more three-dimensional than he initially appears.

As a father of a high school student himself now, Broderick explained that he understands why somebody would become a Rooney, and how that helped in his portrayal of Principal Burr. "It's very difficult these days to be a principal and administrator at a school. They have to be very careful about what they do or say, so he's in a bit of a tough spot."

However, it's not quite accurate to say that Burr and Rooney are the same character. Burr, for one, is much more cheerful and upbeat, the kind of principal who knows every kid's name and at least tries to relate to them on their level. In one of the early episodes, for example, Burr wanders by and makes a comment to Josh that he plays Sombra in Overwatch, proving he's much more hip than his Ferris Bueller predecessor.

In her review of Daybreak, The Verge's Caroline Siede praised Broderick's performance, saying he's not just there for a "quick, knowing cameo." She wrote that Burr "actually winds up playing a surprisingly large role in the flashback storylines" and that Broderick "undercuts the frenetic energy of the series with a gentler comedic tone that works as an effective contrast...he brings a welcome level of earnestness."

Viewers will have to wait and see what role exactly Burr will play, as even the Daybreak trailers will tell you that all adults have been turned into zombie-like "Ghoulies." But regardless of what happens to the character, it's clear that Daybreak simply wouldn't exist without Ferris Bueller's Day Off — as Broderick told Entertainment Tonight, it even replicates some shots from the movie. When the interviewer asked if he approved, he jokingly responded, "you know, it's a living," but that ultimately was "great working with all [the] youngsters on the set," proving his Ferris Bueller journey has truly come full circle.

More like this
'Bridgerton' Star Nicola Coughlan Confirms Season 3 Will Focus On Colin & Penelope
By Grace Wehniainen and Alyssa Lapid
'Doctor Who’s New Star Is Already Huge On TikTok
By Maxine Harrison
What’s New On Netflix: A Victoria Justice Rom-Com & The Return Of David Letterman
By Arya Roshanian
What’s New On Netflix: The Return Of 'Bling Empire' & A Rebel Wilson Comedy
By Arya Roshanian
Get Even More From Bustle — Sign Up For The Newsletter