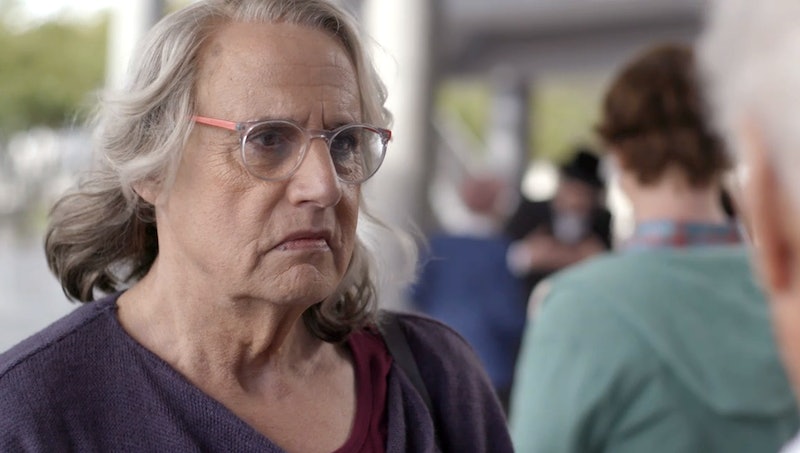 Spoilers ahead for the Transparent: Musciale Finale. The first thing we learn in the Transparent finale is that Maura is dead. Though that sounds like a spoiler, it's hardly one to any fan who's kept up with news about the series, as star Jeffrey Tambor was fired for his alleged sexual misconduct on set in 2018 after wrapping production on Transparent Season 4. But what is Transparent without its titular trans parent? Creator Jill Soloway revealed that Maura would be dead in the Transparent finale in an interview with Los Angeles Times in April. But with Transparent: Musicale Finale premiering on Amazon Prime on Sept. 27, viewers finally see how the series deals with Maura's passing.

Though Transparent is at its heart an ensemble show, it largely revolved around how the Pfefferman family experienced Maura's transition. Maura missing changes not only the family dynamic, but also the core of the show. Rather than ignore this, Transparent acknowledges this fact right away, with Maura dying within the first few minutes. Right as the opening song, "Sepulveda Boulevard," ends, Davina walks into Maura's room to wake her, only to discover that she has died. Maura's body is not shown.

As Sarah says, the official diagnosis is a "ruptured aortic aneurysm" — linking back to how Maura couldn't go through with gender confirmation surgery back in Season 3 due to her heart issues. But the finale is far less concerned with how she died and more concerned with how the family will go on now.

The Wrap reported that Soloway, who uses they/them pronouns, said during the Transparent panel at the Television Critics Association press tour in June that they didn't want Maura's death to feel like a "celebration." Instead, like the characters are mourning Maura, the cast and creators were "mourning what happened with our show."

Tambor left Transparent after he was accused by his former assistant Van Barnes and cast member Trace Lysette — both of whom are trans women — of sexual harassment. The actor, who won two Emmys for his portrayal of Maura, addressed the accusations to The Hollywood Reporter. Tambor said of his on-set behavior, "Lines got blurred. I was difficult. I was mean." But he didn't admit to any real wrongdoing in his treatment of Barnes and Lysette. Soloway told The New York Times how they were "so angry" at Tambor for his behavior. To the Los Angeles Times, Soloway said the finale allowed the cast and crew "to process [their feelings of loss] together."

Tambor's exit wasn't the first controversy for the series. In earlier seasons, the show endured criticism for casting Tambor, a cisgender male, in the role of a transgender woman. (In Season 4, trans actor Zoe Van Brunt did sometimes play Maura in flashbacks.) While Tambor himself isn't present in the Transparent finale, a new character does speak for Maura in some ways. Difficult People's Shakina Nayfack, a trans actor, portrays Ava, and she helped write the music for the Musicale Finale. While she's introduced as a pot dealer for the Pfefferman children, Shelly enlists Ava to portray Maura in her play about the family's life. Shelly eventually cancels the play, but Ava continues to channel Maura in various ways throughout the finale.

These moments can be conflicting for viewers, since it's hard to separate Maura from Tambor. But it's also a way to give Maura a more authentically trans voice, while on a story level helping to provide a sense of closure to Shelly and Ari (Gaby Hoffmann, whose character Ali came out as non-binary and chooses the name Ari in the finale). It's one bright spot in a finale consumed with death and in a show marred by a major controversy.