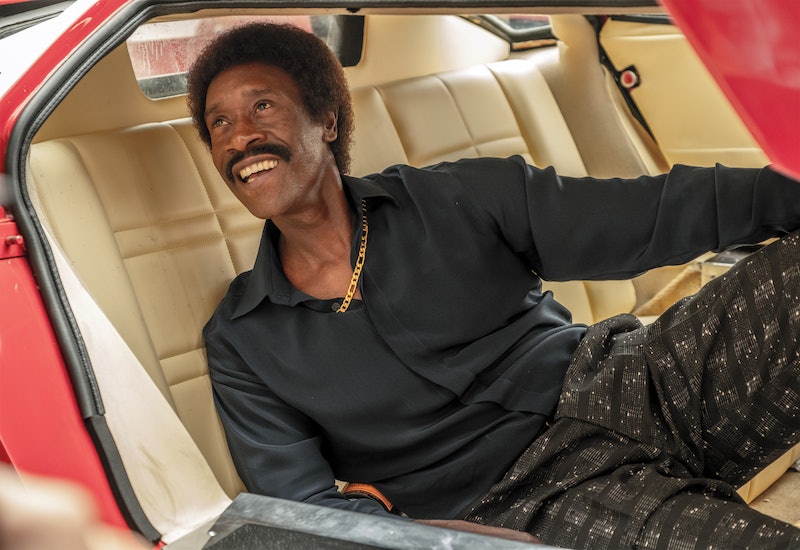 Don Cheadle has portrayed real-life people before in movies like The Rat Pack and Hotel Rwanda, but with Maurice Monroe, he had the chance to make the role completely his own. Just like every other character on the show, Mo on Black Monday isn't a real person. And while it would have been pretty rad to hang out with the brilliantly bonkers broker on Wall Street back in the day, at least you don't have to worry too much about Mo's fate, since he never actually existed.

Of course, the show does center around the real Black Monday stock market crash of 1987, but beyond that, it's totally fictional — and that's what Cheadle liked about it. He told The Hollywood Reporter it was, "a lot of the fun ... to play with the fiction and factual aspects of it, and use this particular group of characters — who wouldn't have existed in the way that they exist in this show, all together, under one roof, in a trading house on Wall Street — to talk about a lot of things. What these characters would have been pushing up against, and trying to claw their way through, just made a lot of grist for the mill."

Cheadle has also shared why he loves playing a character like Mo. "He's a wild card," Cheadle told Entertainment Weekly. "He kind of lives on his insane gut and instinct. It's fun to play a live wire like that." He also told USA Today that the "characters have no filter, they say whatever pops into their head" — which was made abundantly clear in the first episode.

The ridiculous things Mo owns — like the robot butler, the Lamborghini limousine, and his '80s clothes — give insight into the culture of the time, but also speak to the kind of person that Mo is. "The excess of the '80s is in every frame of the show," Cheadle told USA Today. "There's the Lamborghini limousine, [which] has neither the comfort of a limo nor the speed of a Lamborghini. Mo thinks he's crushing in that Adidas tracksuit with the dookie chains. I love that Mo wears Adidas [sneakers] with suits, because he never knows when he may have to stomp somebody out or kick a door open or run. It's functional wear."

But the premiere episode hinted that Mo has a softer side, too. When he skipped his own birthday party (with Michael Jackson and Don Henley in attendance no less!) to celebrate how he used to when he didn't have money, he showed that he's not all about '80s excess.

Since it sure seems like Mo will be one of the major causes behind the actual Black Monday, it's kind of good he's fictional; it would be harder to like him if he were real, knowing what's coming down the line. Instead, you can sit back and enjoy his antics with the comfort of knowing that nothing he did shaped the financial landscape of our own world.