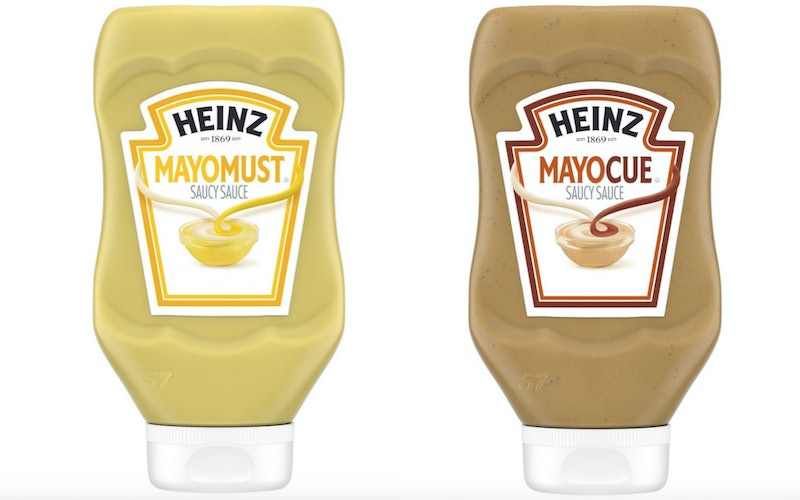 Well, folks, the next great condiment innovation is here (insofar as such a thing as “condiment innovation” exists as a concept): Heinz is introducing Mayocue and Mayomust to the market. From the same company that brought us the mayonnaise-ketchup hybrid known, for good or for ill, as Mayochup, these new sauces combine mayo with… other options — namely, barbecue sauce and mustard. Yea or nay? You decide! (Although for what it's worth, I would bet real, actual money that most people are going to decide "yea." Barbecue sauce and mustard are delicious.)

I will be perfectly honest: I do not get Mayochup, partially because I enjoy mayo on only very limited things (in tuna salad, for example) and partially because it’s just, as far as I can see, thousand island dressing in a squeeze bottle. Regardless, people went bananas for the stuff when it finally arrived in the United States last fall. Previously, it was available pretty much only in the Middle East; however, a customer poll encouraged Heinz to bring it stateside, with about half a million Americans casting their votes in favor of Mayochup. Who knew we all had such strong feelings about the stuff?

With Mayochup being such a resounding success, it was only a matter of time before Heinz gave other condiments the same mash-up treatment — and thus, the new generation of “saucy sauces” was born. (And yes, all of Heinz’s mayo hybrids are officially called “saucy sauces” on their labels. It is ridiculous, but I kind of love it.) Mayocue, as you might have guessed, combines tangy barbecue sauce with creamy mayonnaise, while Mayomust adds some good old-fashioned yellow mustard to the mix. Said Heinz Directing of Marketing Nicole Kulwicki in a press release, “Sauce lovers nationwide have been mixing different condiments to create flavor combinations that will take their favorite foods to the next level for years. First with MAYOCHUP sauce and now with MAYOCUE and MAYOMUST sauces, we’re taking out the guesswork to give our fans the perfect condiment blends from the start!”

Admittedly, Mayocue and Mayomust intrigue me in a way that Mayochup does not. I am still not really a mayo person, but unlike the thousand island/Mayochup comparison, I can’t think of any other comparable condiments that are specifically combinations of mayo and barbecue sauce and/or mustard. That is a new one to me, so, hey, points there, Heinz.

The million-dollar question, of course, is exactly what one might add these new sauces to for maximum effect. Delish’s Madison Flager suggests that Mayocue “could be good in a chicken salad situation, or to add to a sandwich or wrap,” while her pick for Mayomust is basically any sandwich. Personally, I also suspect that if you’re into hot dogs topped with onion relish, mustard, and mayo (like the house ‘dog here! Or here! Both of those are delicious! Source: Me; I have had them both and I can confirm that they are the best), you might like either Mayocue or Mayomust — or both — on top of your next ‘dog.

Although no official release date is currently available for either sauce — the press release simply instructs readers to keep an eye on the @HeinzKetchup_US Twitter page for forthcoming information about the nationwide release — Mayocue and Mayomust are currently available in some places: According to food blog The Impulsive Buy’s Instagram account, one eagle-eyed reader recently spotted both sauces at a location of Texas-based grocery chain H-E-B.

Per Heinz, Mayocue and Mayomust will sell for around $3.49 per 16.5-ounce bottle at major retailers and online (including Amazon!) this month.