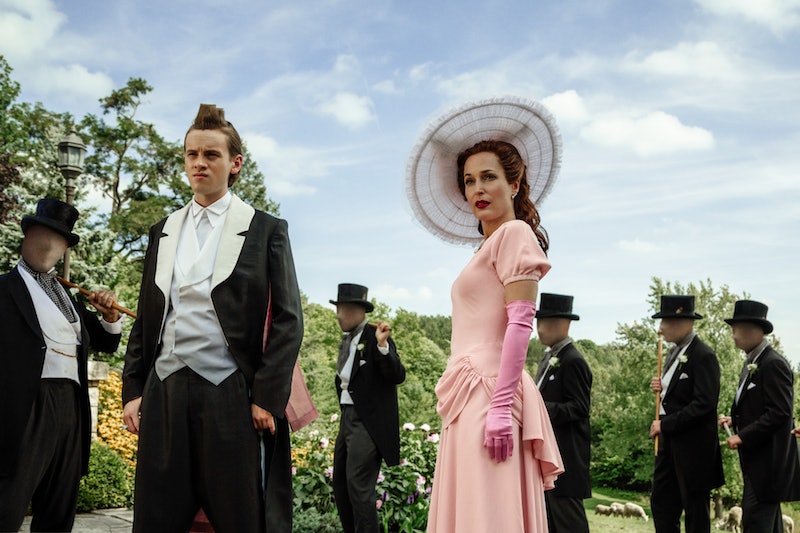 Fannibals all over the world probably felt a frisson of delight this Sunday when Hannibal alum Gillian Anderson made her debut in the second episode of Bryan Fuller's new Starz series. But who is Media on American Gods, exactly? Anderson's new character is a far cry from the bafflingly amoral psychiatrist Dr. Bedelia Du Maurier she played on Fuller's NBC drama; while Du Maurier always spoke in hushed tones and kept her true motivations a secret from everyone around her, Anderson's debut as Media is splashy and in-your-face, and the literal goddess wastes no time in making her intentions known. Oh, and she looks like Lucille Ball to boot.

As you probably guessed from her none-too-subtle name, Media is the goddess of, yes, media. Obviously her purview includes our culture's addiction to television, since she's seen making her first appearance on several TV screens; but the scope of her influence actually extends farther than that to include screens of all shapes and sizes like laptops, iPads, phones, and more — anything you can watch something on, really. (Her realm may intersect with Technical Boy's slightly in the world of computers; but he remains distinct from her in that he's the god of technological advancements like the internet and virtual reality.)

When Anderson's casting was first announced last June, TVLine reported her character description as "the mouthpiece for the New Gods, functioning as their public face and sales representative, by taking the form of various iconic celebrities." Those celebrities include the I Love Lucy getup we saw in Episode 2, as well as Judy Garland by way of Easter Parade (top), and Marilyn Monroe. "Ever the perky spokesperson, and always in control, she spins stories in whatever direction best suits her," the description continued.

So what does Media want? Well, in the short term, she wants to recruit Shadow Moon to her side, as she told the hapless protagonist in this week's episode. It remains unclear so far to the viewers exactly why the ex-con is so sought-after as a pawn in the brewing war between the Old Gods and the New — Media may not even know the answer to that herself yet — but if Mr. Wednesday wants him, then he must be important, and of course Media would try to steal him away from his employer.

But in the long term, what Media wants is simple. It's the same thing every god wants: worship. Thanks to our culture's increasing obsession with television, social media, and the 24-hour news cycle, Media has been growing stronger and is enjoying basking in all the attention — and she's not about to give all that up to a jealous Old God whose power is fading as more and more people forget about him.

If anything, Media's introduction on the show is even more intimidating than it is on the page. In Neil Gaiman's novel, the goddess appears on the screen of the TV in Shadow's hotel room for a nice one-on-one chat; on the show, she boldly broadcast herself across the massive flatscreens on display in a crowded Walmart-like store. That blatant show of power makes it clear that Media isn't messing around; and if I were Shadow, I would hesitate before getting on her bad side.

More like this
Does 'Locke & Key’s Ending Mean There Could Be A Season 4?
By Sophia Moore
Netflix Just Rebooted A Classic ‘90s High School Drama
By Maxine Harrison
Everything To Know About 'RHOC' Season 17
By Brad Witter and Sophia Moore
Watch The Trailer For Netflix’s Edgy New Comedy 'FAKES'
By Brad Witter
Get Even More From Bustle — Sign Up For The Newsletter