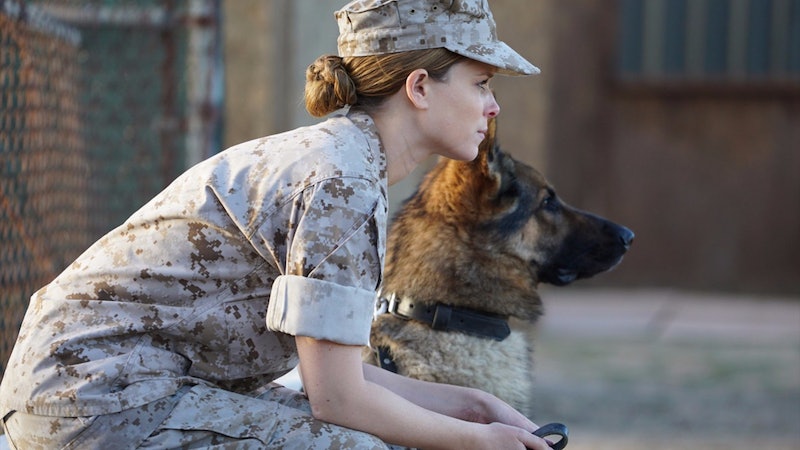 Whether they take place during recent years in Aghanistan or Iraq, or are period pieces examining life during World War I or II, most military movies have one thing in common: men. Nearly all war movies are heavily male-led, with women relegated to "wife/girlfriend" parts or barely in the picture at all. There've been a few exceptions, like Zero Dark Thirty or G.I. Jane, but by and large, female soldiers are M.I.A. from Hollywood's depiction of war. One new film, though, not only features a female soldier as its star, but portrays her as being just as complex as her male peers — which came as a surprise even to the actor playing the real Megan Leavey in the true story-based film, Kate Mara.

"Maybe if you read her story or know a little bit about her, you think, OK, she’s a Marine, she’s been through a lot... you just have preconceived notions that maybe a person would be guarded or super tough and have a hard exterior," Mara says during a recent phone interview, referring to the Marine corporal she plays. "And she’s just not like that. She’s warm and very down to earth and really easy going."

And in the film, Leavey "doesn’t start out really strong and put together," the actor continues. "She’s a mess and doesn’t have a purpose, and is quite lost in a lot of ways... to play that kind of person, and then to watch her find herself and really grow up, is an actor’s dream... If you just play strong women all the time, it can get boring."

Megan Leavey, out June 9, follows Mara's soldier, who unexpectedly bonds with an aggressive military combat dog who accompanies her on many life-saving missions. It's a moving true story, one that was "emotionally draining" to film, Mara says, and, as the actor is all too aware, an anomaly among the many male-led war movies churned out by Hollywood each year. Not only does the film feature Leavey as its protagonist, but it was made primarily by women, with a female director, screenwriter, producer and more. "There were so many women behind the scenes," Mara recalls. "It was exciting, and we were all very proud of that, because it is quite rare to have that many females on one movie set. Especially for a film like this, it was important."

As is the movie's existence overall, in a sea of male-driven dramas. "I felt and feel very humbled by it, and very proud to be able to represent this specific female Marine and female Marines in general," Mara says. "It’s just exciting to me that these types of stories get told."

Leavey is as multi-dimensional a heroine as it gets, and that complexity is a primary reason that the movie's star was drawn to the role. "I like finding characters that are definitely layered and go through a journey, because we all do," Mara says. "As human beings, we all have moments of complete weakness where you just feel like crap, and like you can’t go on — and then to actually find that one thing in life, whether it’s a person or a cause or in [Leavey's] case, an animal, that actually gives you the drive to be a better person and to do things in your life, that’s a really beautiful thing."

An animal advocate who's worked with the Humane Society and promotes veganism, Mara found the soldier-dog bond in Megan Leavey deeply affecting, not to mention eye-opening. "These Marines and these dogs, working dogs, are doing this on a daily basis, and a lot of us — I was one of those people — weren’t really aware of what they go through," she explains. "These animals don’t choose to do it, but they save lives constantly. And they should be respected as the heroes that they are."

Hopefully, Megan Leavey will encourage all the undervalued soldiers in war, canine and human alike, to get the respect they clearly deserve.