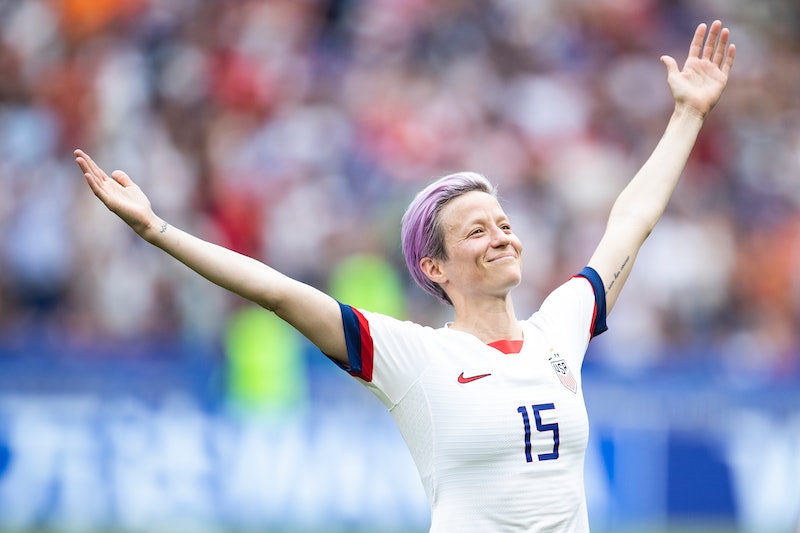 Even if you've never seen a single soccer match, you've likely heard of U.S. Women's soccer team co-captain Megan Rapinoe, whose recent comments about her sexuality and self-confidence will make you love her even more. In fact, they might even set you free.

"I think being gay, it’s like you’re not going to ever be normal, so you don’t have rules, and if you don’t have to follow any rules, all bets are off," Rapinoe, who said she didn't realize she was gay until college, told David Marchese for The New York Times. "A lot of my confidence comes from that, from not feeling societal pressure to be anything other than what I want to be."

Rapinoe says her identity as a lesbian woman has shaped her world view, and is the foundation for her activism. "Rather than being a regular white girl in the 1%, I have a totally different perspective on things, and it’s the basis for all the activism that I do." In addition to helping lead her team a World Cup victory while they were simultaneously fighting the U.S. Soccer Federation over gender discrimination, Rapinoe also took on President Donald Trump on Twitter, saying she would decline an invitation to the White House.

Instead, she says she wants to use her platform to unify people. "I want to bring everybody to the conversation, and the basis of it is equal rights. My big, I don’t know, 'message' right now is that every person has a responsibility to be a participant in this society and make it a better place for everybody, in whatever capacity they can," Rapinoe told Marchese. "And I’m just trying to do the best that I can to inspire people to feel confident that they have the ability to be an active participant in this country, in their community, in their family. And having hard conversations is the only way we can start to move forward."

As a person secure in her identity who knows what she deserves, one of those hard conversations is fighting the U.S. Soccer Federation for equal pay. Rapinoe says the team knows its value and can hopefully use that at the next round of "collective bargaining agreement negotiations" to get compensated fairly.

In addition, Rapinoe, who is in a relationship with professional basketball player Sue Bird, makes a point that openly talking about the things that hold people back is the only real way to move forward. And, in order to have those conversations, people need to know who they are, what they're fighting for, and what they're willing to sacrifice. The absence of these three things could partially account for the lack of out athletes in men's sports.

"I think homophobia in sports accounts for that, but it’s also more than just homophobic culture. Life-changing, generational wealth is at stake for these guys. I think they’re scared to death to lose that. You’ve made it this far, no one in your family has ever done something like this, you and your family have the opportunity to live a completely different life for years and years, and you don’t want to risk that," Rapinoe says, her comments highlighting how much work still needs to be done in order for people to truly feel safe being who they are.

A self-proclaimed "pink-haired, unapologetically flaming gay lesbian," Rapinoe is an inspiring example of how honoring your identity can help you become more comfortable in your own skin, which in turn can give you the confidence to "not settle for crap" and go after everything you deserve. Like a boss.