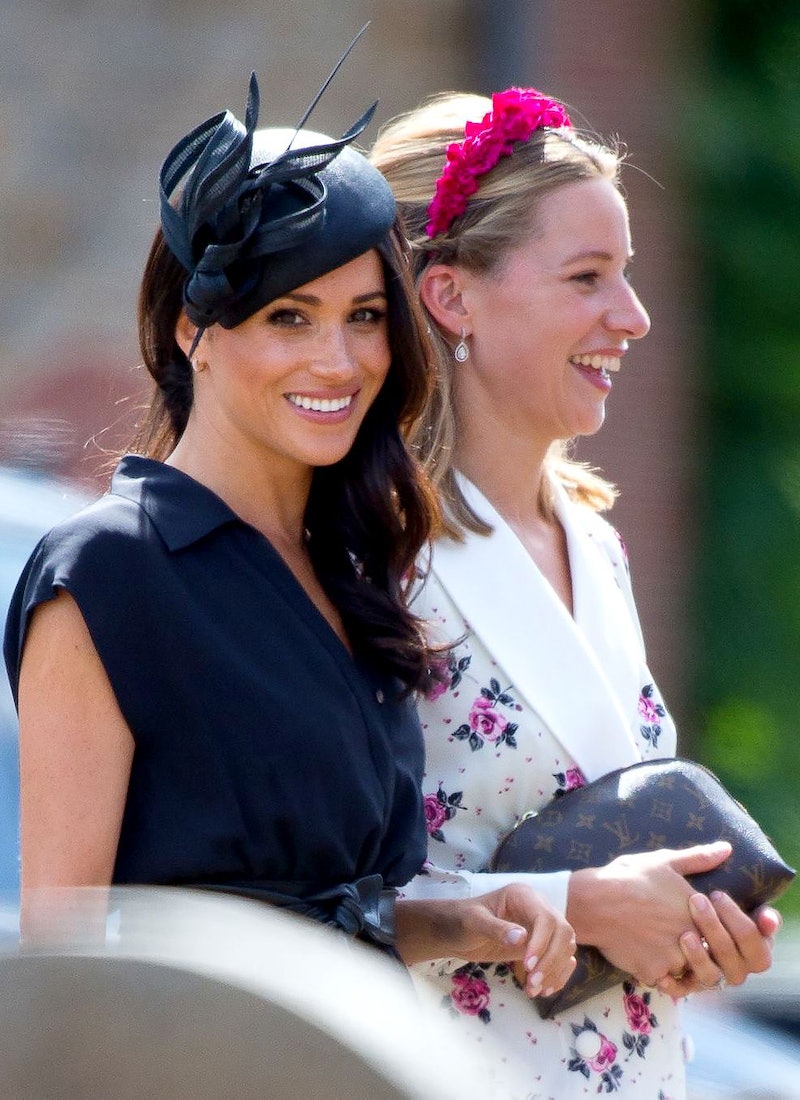 This summer, the Duchess of Sussex has been breaking style rules left, right, and centre. And the royal's most recent outing would probably have left your nan recoiling in horror. Why? Because Meghan Markle's wedding guest outfit was navy — but it looked great, proving that certain traditions perhaps need to be left in the past.

On Saturday, Markle celebrated her 37th birthday by attending someone else's wedding. She and Prince Harry rocked up to witness the marriage of Harry's friend, Charlie van Straubenzee, to Daisy Jenks. The small Surrey nuptials obviously called for an understated look that would keep all eyes on the bride — and that's exactly what Markle delivered.

She arrived wearing a navy shirt dress by Club Monaco. The short-sleeved design featured a button-up top and pleated skirt that mixed pale pink with olive green and white. Considering some of her other purchases, this was practically a bargain at £400, reports the Daily Mail. Alas, the Markle effect has worked its magic. So much so that the dress is now sold out.

The rest of the duchess' look was equally dark. She chose another hat by Philip Treacy, a navy leather belt by Miu Miu, and bow-adorned heels by Aquazzura costing £490. A £175 navy straw clutch by California-based brand KAYU topped off the elegant look along with a gold and diamond Shaun Leane bracelet and pink gold and diamond hoops by Markle's preferred jeweller, Vanessa Tugendhaft.

Seeing as a lot of people want to copy Markle's every sartorial move, it won't be long before wedding attire begins to welcome navy. And if you have a wedding or two left to attend this summer, here's a few darker looks that'll add a certain je ne sais quoi to the proceedings.