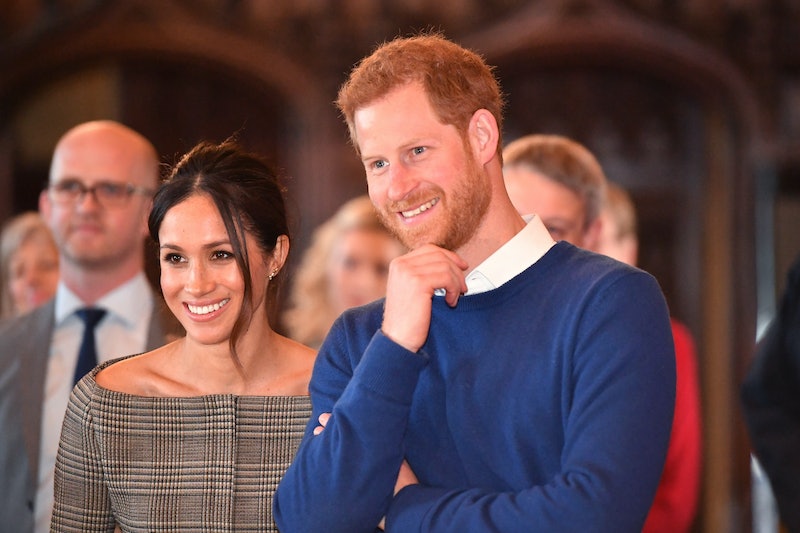 It might not be a shocker, but at least it's official! According to People, Meghan Markle revealed that Prince Harry is a feminist. During the royal couple's Thursday visit to Cardiff, Wales, Markle spoke with a fan named Jessica Phillips. Phillips apparently talked with the former Suits (writer: Sharyn Rothstein) star about her support for gender equality. Phillips told People, "She was so lovely. I said it was really lovely to have a feminist in the royal family." But Markle had a good response for that and according to Phillips pointed out that "Harry is a feminist too."

That is the best piece of information to be revealed about Harry ever, but also no surprise. Of course, Harry is a feminist. It's hard to imagine him not identifying as one, because, well, he seems to be a good guy who wants everyone to have the same opportunities. For example, in March 2016, the 33-year-old royal gave a speech at the Nepal Girl Summit in Kathmandu, Nepal. It was one of the few times Harry openly discussed the gender gap in education.

"While the unique challenges faced by girls is not a topic I have spoken much about in the past, I think it's important to acknowledge something that has become obvious to me and is already known to everyone in this room," he said during his speech. He then said in regards to gender equality:

"There are way too many obstacles between girls and the opportunities they deserve. Whether it's a girl in Lesotho living with HIV; or the talented young woman in Britain who doesn't get taken seriously because of where she grew up; or the 14-year-old girl forced out of school so she can get married here in Nepal; we need to acknowledge that so many countries and cultures are failing to protect the opportunities of young women and girls in the way they do for boys."

He also added, "I believe it is vitally important for men like me to acknowledge this as loudly and openly as role models do like President Bhandari, the U.S. first lady Michelle Obama, and activists like Malala [Yousafzai]. To achieve this, it cannot just be women who speak up for girls."

If you feel the need to give him a delayed standing ovation, by all means, please do.

If his speech in Nepal isn't proof of enough of Harry's feminism, let's talk about that time he supported the HeForShe Campaign, a gender equality movement. As you can read above, he said, "This is not just about women, we men need to recognize the part we play, too. Real men treat women with dignity and give them the respect they deserve."

It's understandable if Harry being an outspoken feminist makes you happy. It's probably something that attracted Markle to him, too. The 36-year-old former actor has long been an advocate for gender equality. "I am proud to be a woman and a feminist," she declared as a United Nation Women's advocate in her March 2015 speech at the 20th anniversary celebration of the Beijing women's conference.

Heck, it's something she's been doing since she was 11. In 1993, Markle appeared on Nick News, where she was interviewed for taking a stand against a commercial that she found sexist. The ad was for Ivory dish soap and stated that "women all over America" were using the product. An 11-year-old Markle ended up writing Proctor & Gamble, the producers of Ivory, and asked, "So I was wondering if you would be able to change your commercial to 'people all over America?'" Eventually, the slogan for the Ivory soap commercial was changed to say, "People all over America," but it was unconfirmed if it was just Markle's doing.

It's no wonder that Harry and Markle ended up together. They have the same beliefs. And with Harry being a feminist, it's further proof that they are truly a modern royal couple who are impacting the British Royal Family in major ways.