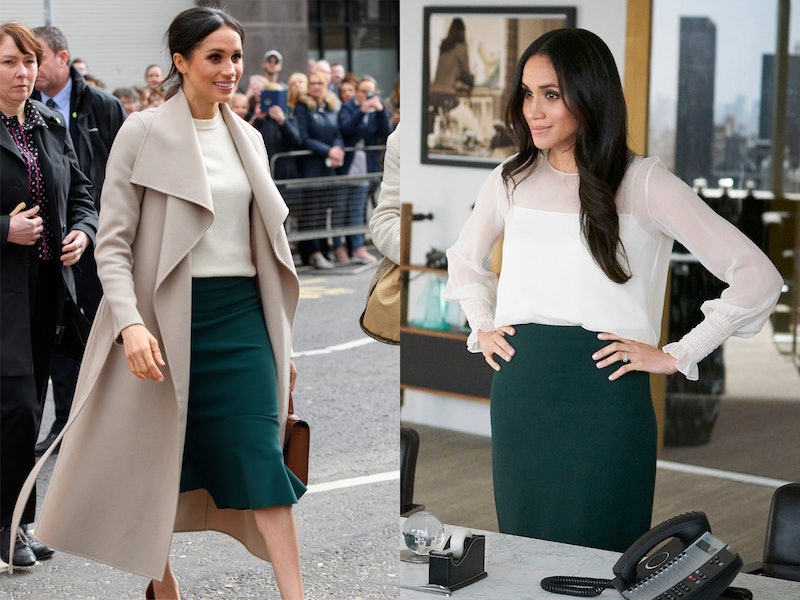 Before she was a royal, Meghan Markle was arguably best known for playing Rachel Zane on the popular television series Suits. In it, she had a wardrobe full of tailored jackets, mid-length pencil skirts, and button-down shirts. Even though she had to recently adapt to royal rules of dress, she’s still managed to get in some Rachel Zane looks that seem to have been engrained into her personal style after years of playing the role on television. But, if you have to share your wardrobe with any TV character, Rachel Zane is a great choice, right?

Zane has a uniform, to be sure. The character is known for her unabashed love of trench coat and neutral color palettes. And Meghan Markle has followed suit (sorry, had to) by embracing Zane's wardrobe but with a modern upgrade. On some occasions, she’s taken Zane’s buttoned-up classic and made it more fun and youthful, like her choice to don a sleeveless trench dress in lieu of a traditional double-breasted overcoat. On others, she’s dressed like Zane nearly to-a-T, embracing the character's famous pencil skirt-and-sweater combo.

Ahead, find the best Meghan Markle-Rachel Zane twinning moments and glean a little Spring 2020 style inspiration from the departing royal and her former television persona.