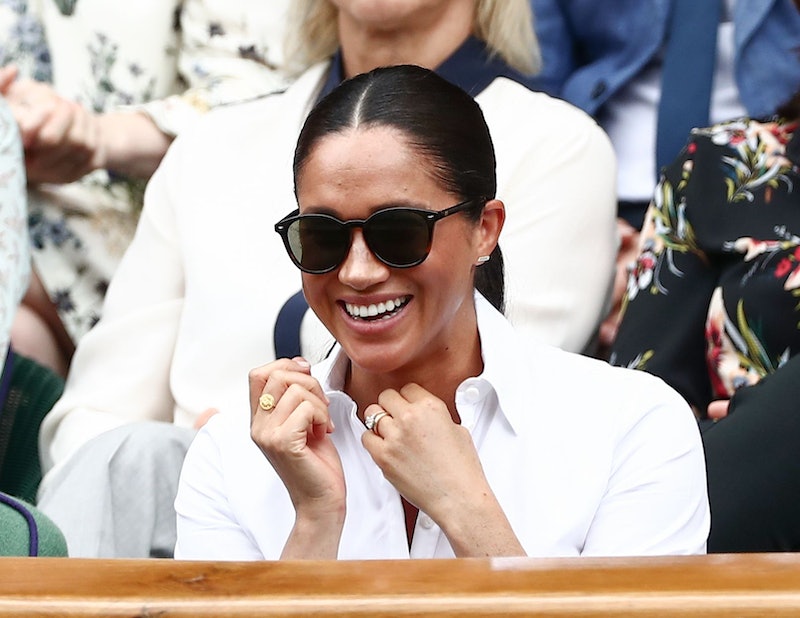 When people have a spare minute or two, it's common to stare out the window. The view from the average person's house is far from exciting, and it's not much different when you're a royal. You've either got a crowd of people outside your gate or acres and acres of land to stare at. So any slice of action is bound to catch your eye. According to reports, this is exactly how Meghan Markle became a fan of bowls.

Typically played by older generations, bowls is a game that is due a bit of a popularity push. It may be traditionally English, but a lot of people wouldn't have the first clue how to play it. (Curious? The aim of the game is to get your bowl as close as possible to a small white ball known as the jack, reports the BBC.) The Duchess of Sussex could change that.

According to the Express, the 37-year-old royal has grown fond of the lawn sport after watching it from her Frogmore Cottage window. She reportedly paid a visit to the Royal Household Bowling Club; a location approximately halfway between her house and Windsor Castle. While there, she is said to have spoken to two female players. A source told the paper: "Meghan remarked to the two players how elegant the game looked."

It's not clear if she participated in a game, but the sport's governing body, Bowls England, is hoping Meghan's support will have positive implications. "It's fair to say that predominantly our members are of an older level, who find the game a wonderful way to keep fit and active and a way to keep being involved in local communities," chief executive Tony Allcock told the Express.

"But we do encourage all ages, and we are finding that those in their thirties and forties are attracted to the sport, which has no barriers and now has a relaxed dress code. We have made huge strides in the game in recent years, and having someone of the Duchess' profile being interested would be a marvellous way to encourage those of younger generations to try bowls. They would find it tremendously rewarding."

If Meghan is indeed a fan of bowls, it will be a thing she has in common with the Queen. In 2013, the monarch turned up to a game in the grounds of Windsor Castle, much to the players' surprise, reports the Daily Mail. Apparently, she even asked if it was okay for her to watch. (Side note: has anyone ever said no to the Queen?)

Whether Meghan will turn into a regular bowls watcher or player remains to be seen. But she has proven to be a keen spectator this summer, having been photographed watching a wide range of sports.

Earlier in July, she attended Wimbledon with Kate Middleton to watch close friend Serena Williams play. Around the same time, per the Independent, the Duchess was spotted on the sidelines of a charity polo match with her son, Archie, in tow. And she turned up to a baseball game with Prince Harry. So bowls really could be next.