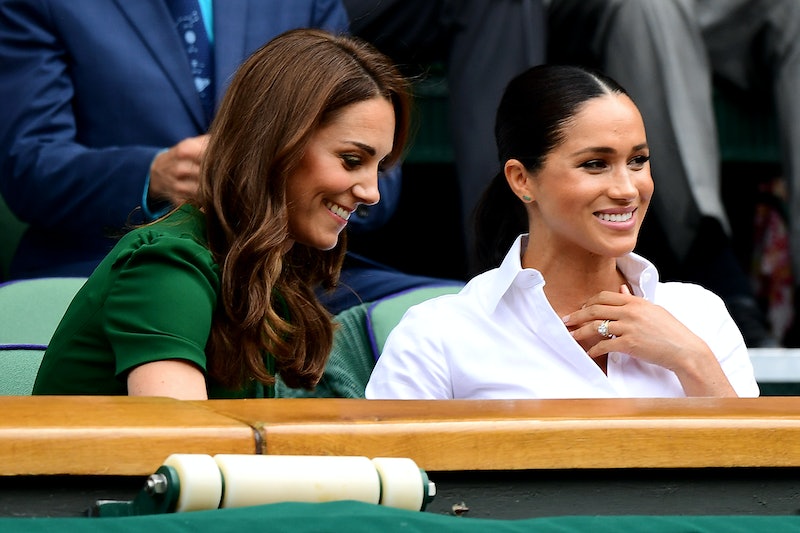 The royal family continued to show that they're major tennis fans on Saturday, when Meghan Markle and Kate Middleton attended Wimbledon together. The duchesses watched the Ladies' Singles Final at Wimbledon which featured the highly anticipated match between Markle's good friend Serena Williams and Simona Halep. Halep ultimately won the game, and earned plenty of cheers from everyone, including the tennis-loving sisters-in-law.

Markle and Middleton appear to be turning attending the Wimbledon Ladies' Final together into a family tradition. They also went to the game together in 2018 — which marked their first outing together without Prince Harry and Prince William, as reported by People. This year, they were joined by Middleton's sister, Pippa, making this royal day out truly one to remember.

Prince William and Middleton's official Instagram account, Kensington Royal, even shared photos from the day. The images of the duchesses enjoying a day of tennis fun are captioned,

Well done to Serena Williams and Simona Halep on a fantastic match, and congratulations Simona on your first Wimbledon title!

Ahead of the match, The Duchess of Cambridge met junior players Kamilla Bartone, Oksana Selekhmeteva, Polina Kudermetova, and Giulia Morlet at the All England Lawn Tennis and Croquet Club."

Despite dealing with the media trying to pit them against one another since Markle and Prince Harry got married, the photos of Middleton and Markle show the two laughing and smiling throughout the match. Earlier in the week, they got together with all of their kids — George, Charlotte, Louis, and baby Archie — to support Prince William and Prince Harry during a charity polo game. And it definitely seems like they're enjoying spending quality family time together this summer.

Markle likely would have loved to see her pal Williams win the match, especially since she would have would have been the second woman to win eight or more Wimbledon singles titles if she had won against Halep, per The Los Angeles Times. However, the tennis champion took her loss in stride. "It was a little bit of deer in the headlights," Williams said after the match, according to the LA Times. "Whenever a player plays that amazing, you just kind of have to take your nod on the head and congrats for all the hard work."

After the match, Middleton, who is a Wimbledon patron, congratulated Halep on her win. "Really well done. Honestly, it was so inspiring to watch. You played an incredible game. It was really, really impressive, so congratulations, and enjoy the celebrations," the Duchess of Cambridge said to the champion in a video shared to her Instagram page.

Even though Williams didn't set a new record for herself, the match looks like it was a blast to watch for the royals. Markle, Middleton, and Pippa all seem to be enjoying themselves in the photos, and it's clear that tennis is something they all three love. Now, the big question is, will they go to Wimbledon together again next year? Because seeing the duchesses hanging out and cheering on amazing women athletes definitely needs to become an official annual event.