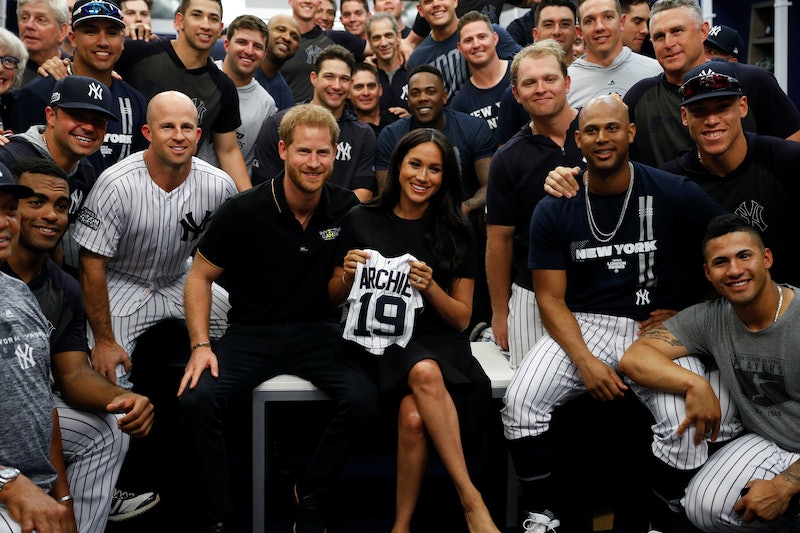 On June 29, Markle and husband Prince Harry attended the first game in Major League Baseball's London Series played by the Boston Red Sox and the New York Yankees. Markle, being American, is likely more acquainted with "American's pastime" than her husband. For the event, the couple visited with both teams and even received adorable presents for their son Archie. As for Markle, according to PopSguar, she was also reunited with long, lost distant relative Mookie Betts who The Boston Globe reported is actually related to the Duchess by ancestors from 150 years ago in Alabama.

It's clear from photos that the Duke and Duchess had a good time, and for the occasion, Markle chose the perfect thing to wear. According to What Meghan Wore, the Duchess donned a black Stella McCartney dress (maybe she didn't want to take sides by wearing color) with short sleeves and an a-line skirt. It was her shoes, however, that are attention grabbing. The Aquazzura flats Markle wore to the game are actually a new take on a shoe she's known for wearing often.

For the game, Markle chose the Aquazzura Deneuve Bow Pointy Toe Flats. The shoes feature a pointed toe design, sling back look, and the signature Aquazzura box on the back. If you happen to want to have a major splurge moment, the shoes are available now on Nordstrom for a cool $695.

The flats are nearly exact replicas of the brand's Deneuve pumps, and Markle choosing to wear them shouldn't be a surprise to those who love her style. In fact, if you're a Markle enthusiast, you'll know that she already owns the Aquazurra pumps in several different colors, and that's just the ones that the public has seen. Who knows what may be hanging out in Markle's shoe closet?

Most recently, Markle wore the pump version of the Aquazurra flats in March to an appearance at Canada House. The event was one of Markle's last prior to her son Archie's birth, and she paired the black version of the shoe with a green coat and matching dress with black sequin appliqué.

In December, during a visit to a nursing home, Markle's floral dress was perfect for the colder weather, and the Duchess proved that flowers can totally work in any season. Her shoes, however, didn't garner quite as much attention as her dress, but it marks a second colorway in the Deneuve pumps she clearly loves.

The most obvious way to tell Markle can't get enough Aquazzura? She potentially had a custome colorway made. In November, Markle wore the heels again, but this time, the navy hue she chose hadn't even been released yet. According to What Meghan Wore, the shoe was likely either custom or exclusive for Markle at the time. Now, that's real love.

Clearly, when it comes to footwear, Meghan Markle has favorite shoes. Whether its a pair of Castañer espadrilles, her Aquazzura pumps, or now the Aquazzura flats, the Duchess of Sussex's shoe game is on point. Honestly, if it isn't broken, why fix it?