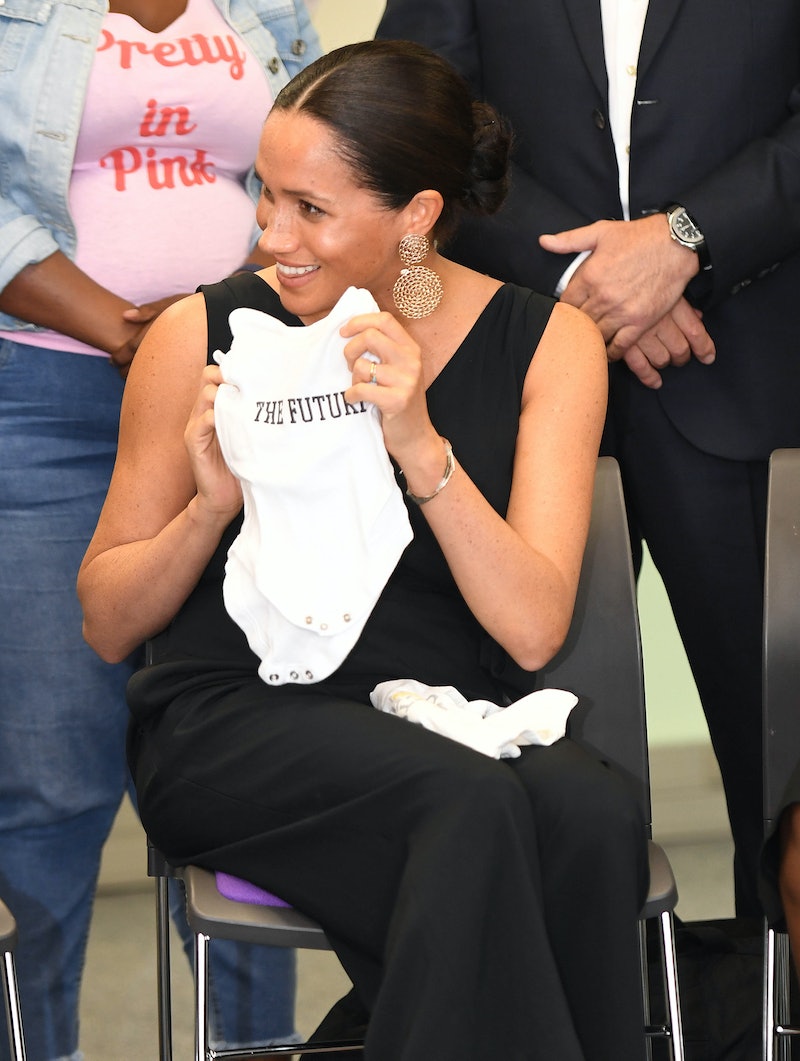 Meghan Markle is missing an important accessory while on a royal tour of South Africa. No, it's not her "Archie" necklace. Meghan Markle's engagement ring isn't on her finger in recent pictures. But the Duchess of Sussex actually has a very good reason why the key piece of jewelry is missing.

According to a source who spoke to Hello!, Markle wanted to remain low-key during her royal visit. To do so, she chose to forgo her massive diamond engagement ring for a delicate turquoise band. After all, Markle's engagement ring is one of the most recognizable pieces of jewelry in the royal family's collection with its three large main stones. While her engagement ring was missing, the Duchess did keep on her Welsh gold wedding band, which was a gift from her grandmother-in-law, the Queen.

The ring Markle is wearing in South Africa is a designer she's worn multiple times, marking the jewelry designer as a favorite. The ring, with its turquoise center stone and golden band, is from Jennifer Meyer.

According to fashion blog Meghan's Mirror, which chronicles all of the Duchess' outfits, the delicate jewelry is available on the designer's website for $250.

While Markle tends to wear a healthy mix of jewelry brands, Meyer's eponymous designs seem to be among the Duchess of Sussex's most recent favorites. Earlier in the week, Markle wore a pair of turquoise earrings from the designer that perfectly matched the temporary engagement piece.

Markle's most famous item from Jennifer Meyer, however, is likely the "Mummy" necklace she was gifted while pregnant with her son, Archie. During the Duchess' visit to New York City for her baby shower back in February, she was spotted wearing the adorable piece when leaving the city, and it was assumed to be a gift from a guest. The sweet homage to motherhood has since shown up a second time when Markle was unexpectedly called on stage by her husband at a charity event in March.

The ring, designed by her husband, features three diamonds, each with a different meaning. Two of the stones are from a brooch found in Princess Diana's personal collection of jewelry, while the main stone is from Botswana, the country Prince Harry and Markle visited while dating.

Since the engagement, Markle has updated the famous ring and added a diamond pave band. On the underside of the ring, there are three additional gemstones — her, Prince Harry, and Archie's birthstones.

Markle's replacement engagement ring, along with her decision to rewear multiple pieces of clothing during the royal tour, suggest she doesn't want to draw too much attention to herself on this trip. Or maybe she's just an unapologetic outfit repeater just like you.