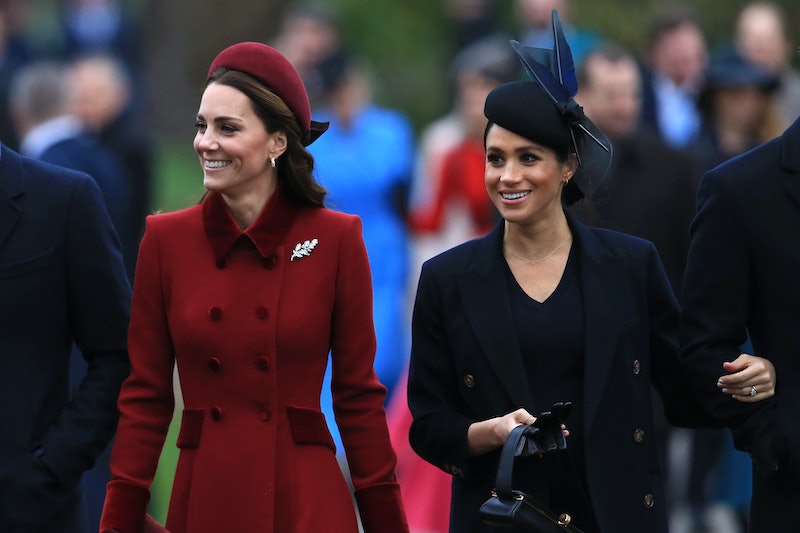 Royal baby Archie is bringing people together — and not just his parents, Prince Harry and Meghan Markle. Meghan and Kate Middleton are bonding over motherhood, a source told Us Weekly, which just adds even more evidence to the fact that the two of them aren't really "feuding" at all.

"Meghan and Kate will be spending a lot more time together," a source told the magazine. "Now that they're bonding over motherhood, they've become closer than ever."

Prince William and Kate are parenting pros at this point, considering the fact that they already have three children. With everything Kate's learned from being mom to Prince George, Princess Charlotte, and Prince Louis, she probably has more than a few pointers to share with Meghan.

Harry and Meghan welcomed their first child on May 6. The Sussexes confirmed the news on Instagram, sharing that the baby was a boy. The royals later revealed the baby's name, Archie Harrison Mountbatten-Windsor, while sharing a post of the Queen meeting her great-grandchild.

"This afternoon Their Royal Highnesses introduced Her Majesty The Queen to her eighth great-grandchild at Windsor Castle," the photo caption read. "The Duke of Edinburgh and The Duchess' mother were also present for this special occasion."

More recently, Will and Kate met baby Archie on Tuesday, a palace spokesperson confirmed to People. Apparently, the Cambridges visited the Sussexes' home at Frogmore Cottage for an informal visit. There aren't any photos from the meeting, but it's safe to say Archie's aunt and uncle showered him with plenty of love.

There's at least one family member who still hasn't met the baby, though. According to People, Prince Charles will meet his grandson on Thursday. It's not because of any tension between the family members, though — Charles was in Germany the day after Archie was born.

"We couldn't be more delighted at the news, and we're looking forward to meeting the baby when we return," Charles said in a statement provided to People last week.

The news about Kate and Meghan bonding over motherhood probably won't come as a huge surprise to fans. But it should help keep the feud rumors at rest — and honestly, they were pretty shaky in the first place. Last December, a palace spokesperson issued a statement about the reported feud to The Sun, and it sounds like the rumors had really gotten out of hand.

The Sun had originally reported that Kate and Meghan had a "row" over Meghan's reported treatment of Kate's staff. Kensington Palace had some words to say about the report, though, telling The Sun, "This never happened."

Meghan and Kate's new connection over motherhood underscores the fact that there likely isn't bad blood between them. They're both focused on their children and on being parents, and they probably don't have time to worry about their supposed disagreement.

Baby Archie has three great cousins to look up to and play with as he gets older. And if Meghan needs any advice on raising young royals (or just motherhood in general), Kate will be right by her side.

More like this
The Difference Between The Royal "Institution" & "The Firm" Shows Who's Really In Charge
By Savannah Walsh and Meguire Hennes
8 Photos Of Prince George & Princess Charlotte At Queen Elizabeth II's Funeral
By Jake Viswanath
The Prince William & Rose Hanbury Rumours, Explained
By Frances Stewart and Sam Ramsden
Here's When 'The Crown' Season 5 Will Premiere — And What To Expect
By Bustle Editors
Get Even More From Bustle — Sign Up For The Newsletter