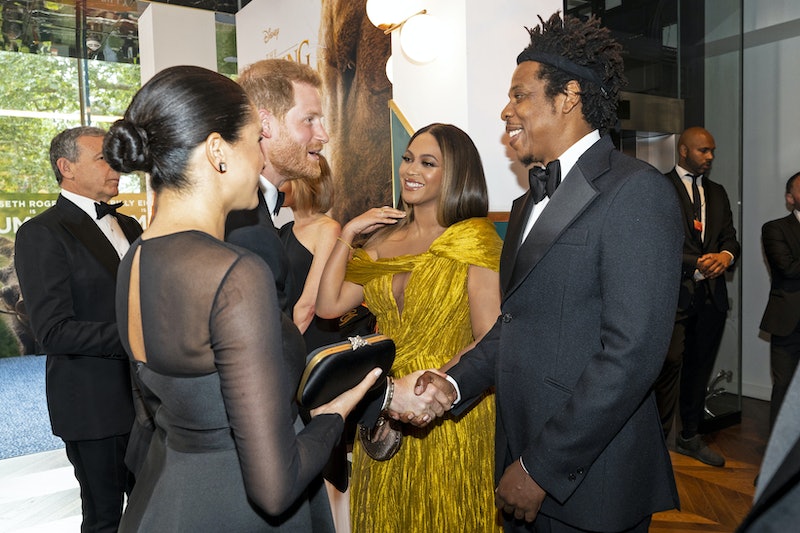 Members of the Beyhive and fans of the royal family were finally able to witness the crossover of the century over the weekend when Meghan Markle and Beyoncé finally met at The Lion King premiere in London. And apparently, this moment was a long time coming — especially for the Duchess of Sussex. In fact, Markle meeting Beyoncé was a truly full-circle moment, going all the way back to a time when Markle was an actress who had no idea she'd end up married to Prince Harry.

As a fan named @DuchyofSuccess, who tweeted about their meeting, pointed out, Markle has loved Beyoncé for years — long before she had the possibility of coming face to face with her. In a screenshot from Markle's Instagram account (before it was deleted when she officially became a member of the royal family) that was included in the tweet, Markle shared a photo of herself posing against a brick wall, giving the singer a shout out and quoting some of her lyrics from "Formation."

"The closest I will ever come to channing Beyoncé," Markle wrote, adding the hashtags "#hotsauceinmybagswag #actually #just #hotsauceinmybag" along with a laughing face emoji.

It's hard to believe that Markle was once quoting Beyoncé and using emojis on Instagram, but it happened — and little did she know that she was about to have a huge glow up in the Bey department.

This definitely isn't the only time that Markle has flown her Beyoncé fan flag high. Back in July, Idris Elba — who was the DJ at the wedding — revealed in an interview with Entertainment Tonight that Beyoncé was actually on Markle and Harry's wedding playlist.

"There's always Beyonce on the playlist," he said. "You already know that!" Because really, what would a wedding reception be without Beyoncé? Not even the royal family is above it.

Beyoncé seemed to show some love back to Markle when they included her as the Mona Lisa in a recreation of their "APES**T" music video as they accepted the award for International Group at the 2019 BRIT Awards. In an Instagram post Bey shared at the time, she wrote, "In honor of Black History Month, we bow down to one of our Melanated Monas. Congrats on your pregnancy! We wish you so much joy."

In the same month, Beyoncé also wrote a tribute to Markle on her website, highlighting her charitable work and the way she changed the world by becoming part of the royal family as a black woman.

"Meghan brought many Black traditions to her Royal Wedding including a Chicago-based Black pastor, an amazing gospel choir, and a young Black cellist," Beyoncé wrote. "At the wedding her culture was front and center, and she and Prince Harry have continued to push the race relations dialogue forward both near and far."

And now, Markle and Beyoncé are hugging on the red carpet at The Lion King premiered, a movie in which Beyoncé herself voices Nala from the iconic Disney movie. Is this a future any of us could have ever imagined, Markle included?

Let's just hope that this means Beyoncé and Markle will be spending a lot more time together in the future. A group photo of Blue Ivy, Rumi, Sir, and Archie might just break the internet permanently.