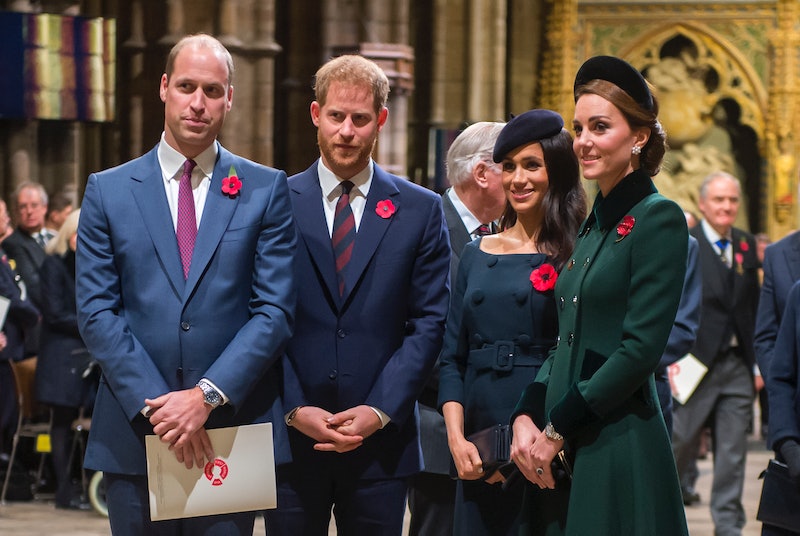 The Fab Four is back in action, royal watchers. According to E! News, Meghan Markle, Prince Harry, Kate Middleton, and Prince William reunited at an event held at Buckingham Palace recently. Not only did the two couples reunite publicly for the first time in months, but their appearance also marked a special milestone for the princes' father, Prince Charles.

On March 5, the Duke and Duchess of Sussex and the Duke and Duchess of Cambridge attended the event which was held in honor of the 50th anniversary Charles' investiture as the official Prince of Wales. Queen Elizabeth's heir, who is 70 years old, has held the Prince of Wales title since 1958. But, it wasn't until July 1969 that he was formally invested with the title during a ceremony in north Wales, hence the 50th anniversary celebration that took place recently, according to People.

In addition to the duchesses (who were the epitome of glamour, as always) and their dukes, Queen Elizabeth, Camilla, the Duchess of Cornwall, Prime Minister Theresa May and multiple representatives from many of Charles' royal patronages attended the event. It was great that the whole family showed up to support Charles during this recent celebration, not only because it's always such fun to see the four royals reunite, but also because of the special meaning behind the event for the longstanding Prince of Wales.

As previously mentioned, the last time that Markle, Harry, Middleton, and William were spotted in public together was during Christmas. As People noted, the royals all attended Elizabeth's traditional holiday celebration at her Sandringham estate. The royals' Christmas appearance simultaneously marked the Duchess of Sussex's first as an official member of the royal family and a major moment for the foursome, who put on a united front in the midst of some unfortunate feud rumors.

A source opened up to People about the family get-together and, according to them, the festivities went off without a hitch. “They really loved Christmas and all had a wonderful time," the insider revealed, “I think the two women got on — they are definitely not best friends, but it was a really special time for them all to spend together.”

Even though the royals haven't been on any official engagements together prior to this recent Buckingham Palace celebration, that doesn't mean that there's a reason to start up those feud rumors again. After all, it seems like all is well in the family, especially if a recent report concerning the two duchesses is true.

According to a source for Us Weekly, Middleton may be throwing Markle a baby shower sometime soon. This possible baby shower would mark the second celebration for the Duchess of Sussex and her little one, as she already had a shower with her friends in New York City in mid-February. "There is still going to be some sort of private baby-centric event for Meghan’s U.K. people, and Kate will host," the source claimed, "Her glam people and other relatives will be there. Not sure if it’s a total baby ‘shower,’ but you could probably call it that.”

The royal Fab Four's appearance at Charles' big milestone celebration should definitely help put an end to any of those lingering feud rumors, just in case anyone needed any more convincing that there's no drama amongst this tight-knit crew.