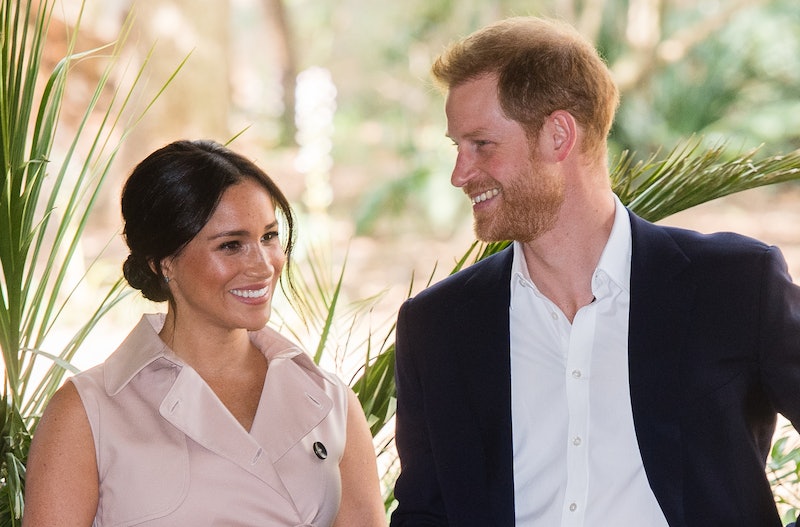 The royal family has grown accustomed to getting their photo taken for various occasions, but Meghan Markle and Prince Harry's holiday card with Archie is truly the gift that will keep on giving long after Christmas is over. The image was tweeted out on Monday, Dec. 23 by The Queen’s Commonwealth Trust and serves as the royal's first holiday greeting as a family of three. But while Meghan and Prince Harry can be seen in the background of the photo, it's 7-month-old Archie who completely steals the show, starring adorably into the camera at the front and center of the action.

“Just sharing the sweetest Christmas Card from our President and Vice-President, The Duke and Duchess of Sussex. Very Merry Christmas, everyone!” The Queen’s Commonwealth Trust tweet read. Meanwhile, the card itself had a personal message of its own as well directly from the Duke and Duchess of Sussex themselves. “Wishing you a very Merry Christmas and a Happy New Year. From our family to yours,” Meghan and Harry's card states.

Having been born in May 2019, this serves as Archie's very first Christmas and based on that quizzical look he's giving the camera, he still seems unsure what to make of it all, though that's sure to change once Santa makes his royal delivery.

Of course, this isn't the first Christmas greeting Meghan and Prince Harry have sent out together. Last year, the couple shared their first holiday card as newlyweds, which featured a photo of the two of them from their wedding reception at Frogmore House as they enjoy a dazzling fireworks display while wrapped in each other's arms. Now, a year later, there's a new spark that lights up their life and holds all of their attention: Baby Archie.

Traditionally, the royal family joins Queen Elizabeth at Sandringham Estate in Norfolk, England, for Christmas. However, Meghan, Prince Harry, and Archie will not be joining in the festivities this year. A royal spokesperson confirmed that the duo will be taking Archie to spend the holiday in Canada with Meghan's mother.

“Having spent the last two Christmases at Sandringham, Their Royal Highnesses will spend the holiday this year, as a new family, with the Duchess’ mother Doria Ragland,” Buckingham Palace said in a statement, as per Entertainment Weekly. “This decision is in line with precedent set previously by other members of the Royal Family, and has the support of Her Majesty The Queen.”

Considering what an incredibly busy year Meghan and Prince Harry have had — from welcoming their first child and moving into their Windsor cottage home to completing a successful tour in Africa — it isn't surprising they would want a private, intimate setting to spend the holidays. And if their holiday card is any indication, this royal family of three already have everything they want this Christmas.