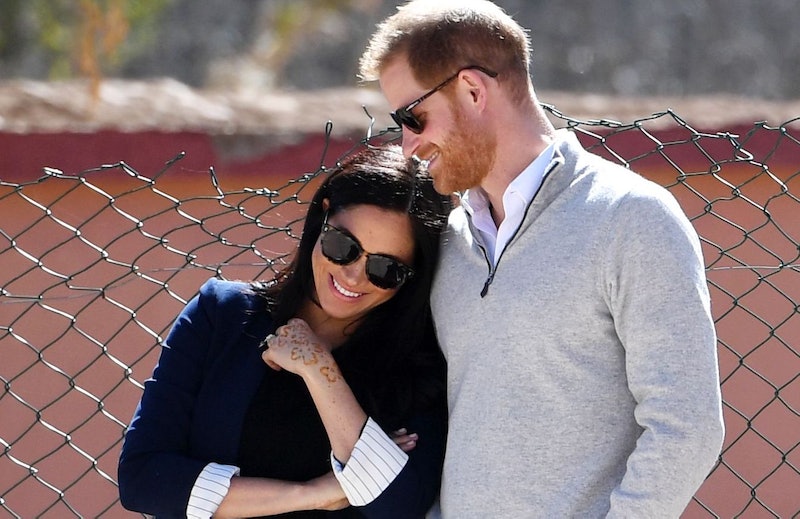 Long before she was a public figure, Meghan Markle was a feminist: according to the Royal Family's website, she campaigned against a sexist washing-up liquid advert at just 11 years old, persuading them to change its language. And as the Duchess of Sussex, she's upheld those values, as demonstrated by Meghan Markle and Prince Harry's Morocco tour itinerary. During their three-day visit, Kensington Palace tweeted, the couple "will see work being done to promote girls' education, empower young people and support children from disadvantaged backgrounds."

According to the BBC, the Duke and Duchess of Sussex arrived at Casablanca airport on February 23, where they were greeted with a red carpet and a welcome of milk and dates. They then met with Morocco's Crown Prince Moulay Hassan. The couple are staying at a royal residence of King Mohammed VI.

Thomas Reilly, British ambassador to Morocco, told the BBC, "I'm really excited to showcase the vital roles that girls' education and youth employment are playing in shaping modern Morocco." The ambassador added, "This official visit by the Duke and Duchess of Sussex will highlight Morocco's focus on women's empowerment, girls' education, inclusivity and the encouragement of social entrepreneurship."

On February 24, the royal couple flew from Rabat, Morocco's capital, to Asni, the BBC reports. There, they visited boarding houses run by the charity Education for All, which boosts girls' access to education by providing them with a place to stay near their school during the week. Kensington Palace tweeted that many girls in Morocco "have limited access to secondary school or no means of affording transport to school."

The Duke and Duchess were greeted with a welcome song from the girls staying at the boarding houses, the Palace tweeted. They visited classrooms where girls were studying, and spoke to teachers at the Lycée Collegial Le Grand Atlas, where the girls from the boarding houses stay. One video shows Markle speaking in both French and English to some students in their dormitories, asking them about their plans for their future ("We love and stan a multilingual duchess Meghan," a Twitter user replied.)

Afterwards, the Duchess of Sussex received a henna ceremony, which, the Palace noted, is "a Moroccan tradition for pregnant women." The couple also watched students play a football match. Prince Harry presented Michael McHugo, founder of Education for All, with his MBE, saying, "It is with great pleasure that on Her Majesty’s behalf, I present you with the badge of honour. May I congratulate you on all the work you have done to improve gender equality."

According to Town and Country, the Duke and Duchess will attend a reception in Rabat tonight, at the residence of the British ambassador. Tomorrow, they'll pay a visit to the Moroccan Royal Federation of Equestrian Sports, which hosts a programme for children with special needs, followed by an introduction to Moroccan cuisine at Villa des Ambassadors. Their last engagement is at the Andalusian Gardens, where they'll focus on an initiative to empower young people.

It's no surprise, of course, that Meghan Markle has championed gender equality in her royal duties. In 2015, as the Royal Family's website notes, she became the United Nations' Women's Advocate for Women’s Political Participation and Leadership; speaking on International Women's Day at the UN the same year, she said, "I am proud to be a woman and a feminist."

In October 2018, during the couple's tour of Fiji, Australia, New Zealand, and Tonga, she spoke at Fiji's University of the South Pacific. "Everyone should be afforded the opportunity to receive the education they want, but more importantly the education they have the right to receive," the Duchess said, as the Cut reports. "When girls are given the right tools to succeed, they can create incredible futures, not only for themselves but for all of those around them." Honestly, is it it any wonder Queen Bey's such a big fan?