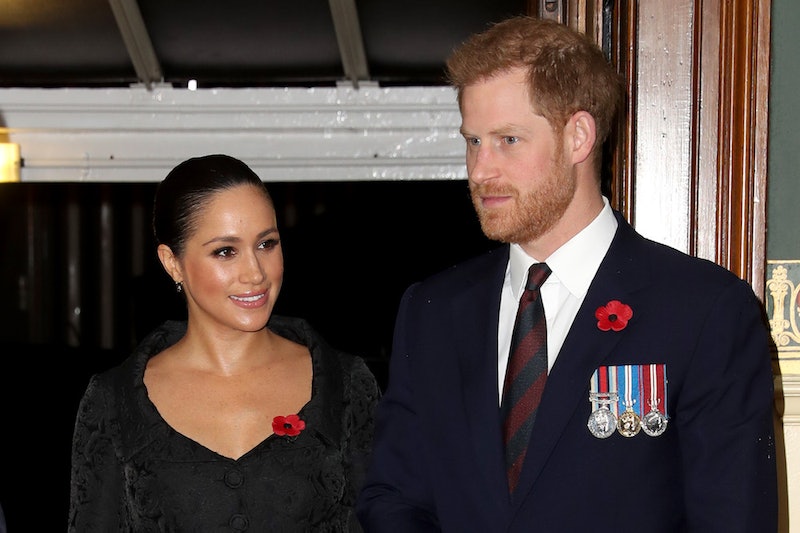 Meghan, Duchess of Sussex and Prince Harry, Duke of Sussex honored those who lost their lives in war at a Remembrance Day ceremony in London on Sunday, Nov. 10. Meghan and Harry’s latest outing is their first with the royal family since their ITV documentary, Harry & Meghan: An African Journey, aired in mid-October. At the war memorial The Cenotaph, Meghan and Harry joined Queen Elizabeth II, Kate, Duchess of Cambridge, Prince William, Duke of Cambridge, Camilla, Duchess of Cornwall, and more to honor the veterans of World War I.

At the ceremony, Harry and William laid wreaths of poppies after the royals observed a two-minute silence to remember the lives lost in conflict, as per an Instagram post from Kensington Palace. Meghan, Kate, and Queen Elizabeth, on the other hand, looked on from balconies of the war memorial while donned in black outfits with red poppy pins — symbolic of the remembrance of the armed forces — pinned on their coat lapels.

Meghan and Harry’s outing with the extended royal family is the first since Meghan opened up about the toll of the negative press in Harry & Meghan: An African Journey. The documentary, which aired on ITV on Oct. 20, chronicled the couple’s 10-day royal tour across South Africa. In a widely-circulated clip on Twitter, Meghan addressed the media scrutiny while she was pregnant with son Archie, whom she and Harry welcomed in May.

"Any woman, especially when they're pregnant, you're really vulnerable, and so that was made really challenging," Meghan said in the clip. “It's a lot. So, you add this on top of just trying to be a new mom or trying to be a newlywed… It’s a very real thing to be going through behind the scenes."

Toward the end of their African tour, Harry and Meghan announced a lawsuit against British tabloid The Mail on Sunday and its parent company, Associated Newspapers for invasion of privacy. In a statement published on the Sussex Royal website on Oct. 1, Harry cited the alleged “relentless propaganda” and “false and malicious” media harassment against Meghan.

The statement read, in part, “The positive coverage of the past week from these same publications exposes the double standards of this specific press pack that has vilified [Meghan] almost daily for the past nine months… She is the same woman she was a year ago on our wedding day, just as she is the same woman you’ve seen on this Africa tour.”

More like this
10 Times Diana & Meghan Spoke Similarly On The Royal Family
By Sophie McEvoy
Taylor Swift, Kerry Washington & More Speak Out On Uvalde Mass Shooting
By Jake Viswanath
Taylor Swift Knew Hayley Kiyoko & Becca Tilley Were Dating 4 Years Ago
By Grace Wehniainen
Here’s Everything Coming To & Leaving Netflix In June
By Alyssa Lapid
Get Even More From Bustle — Sign Up For The Newsletter