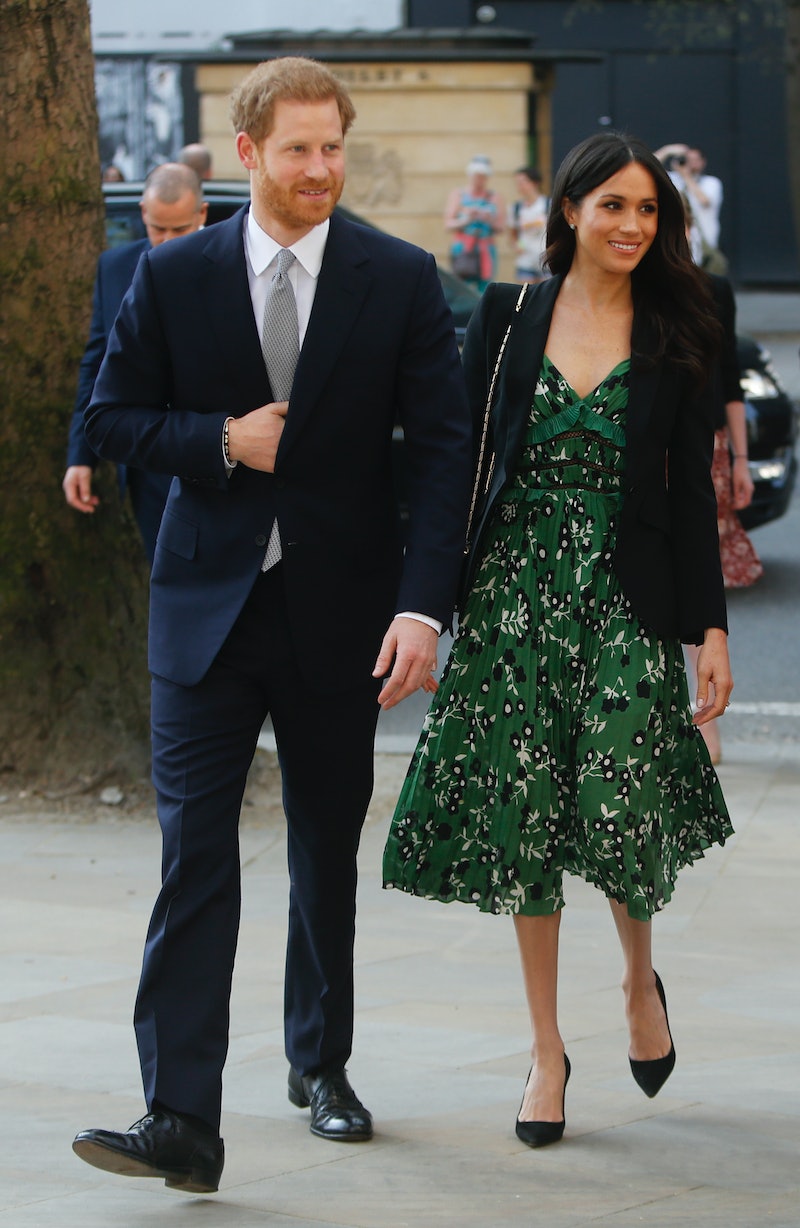 Prince Harry and Meghan Markle might not have any public appearances scheduled for the final weeks leading up to their wedding day, but that doesn't mean the soon-to-be married couple isn't as busy as ever. In the latest news of royal wedding preparations, plans for Prince Harry and Meghan Markle's horse-drawn carriage procession are well underway. According to a string of updates tweeted out Wednesday morning by the official Twitter accounts associated with both The Royal Family and Kensington Palace, the almost-newlyweds have made their pick for which traditional royal carriage they'll ride in during their special day.

As long as the weather is fair, the couple will take one of the Royal Mews' most prestigious horse-drawn carriages, of which there are only a select few. Kensington Palace announced the couple's carriage selection early Wednesday morning via its via its official Twitter account, writing,

"Prince Harry and Ms. Meghan Markle have selected the Ascot Landau carriage for their procession through Windsor Town after their wedding on May 19th."

Following their much-anticipated wedding ceremony at St. George's Chapel, Harry and Markle will complete a quick tour of Windsor's surrounding neighborhood via horse-drawn carriage. According to a recent statement from the Palace, the couple's post-wedding carriage procession is intended to provide "an opportunity for members of the public to see them and join in with celebrations."

This particular carriage is one of just five Ascot Landaus corralled within the Royal Mews, according to a follow-up tweet from Kensington Palace, which continued on to explain that such carriages are generally "used in official and ceremonial state events," like coronations, state visits, and — of course — royal weddings. Perhaps most notably, the Landaus carriages are employed annually by the Royal Family to carry the Queen during her traditional procession ahead of the Royal Ascot, Britain's premier horse-racing event.

And not only that, but two of the esteemed carriages also appeared during Kate Middleton and Prince Williams' 2011 wedding ceremony, according to a statement by the Palace — which means, for Prince Harry, his upcoming post-wedding jaunt in an Ascot Landau won't be his first. (Since Harry served as the best man during his brother's wedding, he accompanied William and Kate during their carriage procession.)

In conjunction with the morning's robust series of tweets unveiling the details of Harry and Markle's upcoming carriage procession, the Palace also released a lengthier statement via its official website. The statement offers a more thorough explanation as to the multi-pronged historical significance of the Ascot Landau carriage, especially within the context of the royal family.

According to the statement, Harry and Markle's carriage will be accompanied by a band of six Windsor Grey horses (each of which touts a truly fantastic name: Plymouth, Londonderry, Milford Haven, Sir Basil, Tyrone, and Storm), which have historically been involved in the major ceremonial happenings of Britain's royal family.

And, per the Palace's statement, a traveling escort of the Household Cavalry Regiment (Prince Harry's former army regiment) will also be accompanying the couple during their carriage procession.

At the request of Prince Harry, who served in the British Army for 10 years before his departure in 2015, the Palace also has other plans set in motion to involve members of the Army in his and Markle's special day. Back in March, Kensington Palace announced via Twitter that several Armed Forces units with a "special connection" to Prince Harry received invitations to the wedding. According to a statement by The Ministry of Defence, the couple invited more than 250 members of the military to perform "ceremonial duties" during the day's wedding proceedings.

So, for any U.K. residents angling to catch a glimpse of Prince Harry and Markle perched atop a horse-drawn carriage after they tie the knot, that might actually be possible (if you're able to make it over to Windsor, that is). As for the rest of us — it seems we'll just have to bear witness to the couple's fairytale-like procession from our television screens.

More like this
The Difference Between The Royal "Institution" & "The Firm" Shows Who's Really In Charge
By Savannah Walsh and Meguire Hennes
10 Photos Of William, Harry, & Their Cousins Honoring The Queen Together
By Stephanie Topacio Long
William & Kate Shared How Their Kids Are Doing As They Mourn The Queen
By Stephanie Topacio Long
Oprah Winfrey Revealed Her Hopes For Prince Harry & The Royal Family
By Maxine Harrison
Get Even More From Bustle — Sign Up For The Newsletter