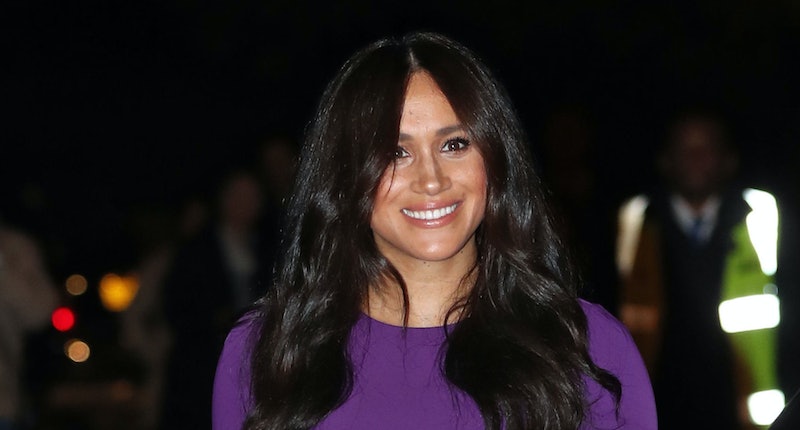 The use of the word "recycling" has become synonymous with the wardrobes of famous women. They wear it more than once; it's deemed to be eco-friendly. Nowhere is this more prevalent than in royal fashion discussions. But re-wearing clothes is something literally every single person does. It's time to change the narrative, so here goes. On Tuesday night, Meghan, Duchess of Sussex behaved like an average human being and re-wore a super affordable purple dress.

Arriving at the London-based opening ceremony of the One Young World Summit — a four-day event bringing together young activists and industry leaders — Meghan certainly stood out in a bold purple midi dress. The long-sleeved matte satin design, known as the Maxwell, is a design by Canadian brand Aritzia. (Specifically by Aritzia's own brand, Babaton.)

And, unlike some of the Duchesses designer pieces, it's pretty affordable. Originally $138 (£107), the flowing dress had been reduced to $49.99 (just under £40). Alas, it is completely sold out online. Meghan's version seems to have been modified from the original. Photos on Aritzia's site show a thigh high slit while Meghan's boasts a much subtler cut.

She paired the appropriately royal hue with a pair of navy suede Manolo Blahnik heels worth £540. According to The Sun, they are the exact same pair the Duchess donned to Princess Eugenie's 2018 wedding.

It's not the first time the dress has made an appearance either. Back in January, a pregnant Meghan took a trip to Birkenhead with Prince Harry, Duke of Sussex. For the visit, she wore the same purple design, pairing it with an even bolder red coat by fellow Canadian brand Sentaler. The royal's newest iteration, however, had a much more relaxed vibe thanks to minimal accessories and a loose, wavy hairstyle.

The ceremony marked Meghan's first public outing since the release of the eye-opening ITV documentary, Harry and Meghan: An African Journey. Attending in her role as vice president of the Queen's Commonwealth Trust, Tuesday night was the third time she has taken part in the summit.

In 2014, she appeared in Dublin as a counsellor for the organisation. She took on the same role for the Ottawa-based summit in 2016. Later this week, Meghan will be hosting a discussion with several young people on the importance of gender equality and what can be done to reach such equity across the globe.

If you're lusting over the Duchesses budget-friendly dress, the high street has a few copycat tricks up its sleeve:

Hadley Ottoman Midi Dress
Boden
This versatile short-sleeved version comes with a full skirt and a romantic sweetheart neckline, so you can wear it to the office for a special weekend occasion. Available in UK size 6 to 22.
Hollywood Purple Mid Sleeve Pencil Dress
The Pretty Dress Company
This '60s-inspired design comes in a very similar hue to Meghan's original midi style. Plus, it's got loads of subtle details including a V-shaped back and stretch control lining. Available in UK size 8 to 18.
Sequin Detail Drape Maxi Dress
JD Williams
With a velvety material and party-friendly sequinned cuffs, this blackcurrant-hued gown is ideal for any and all festive occasions. Available in UK size 10 to 32.

And if you want the real deal, you'd better pray that Aritzia re-releases the Maxwell.