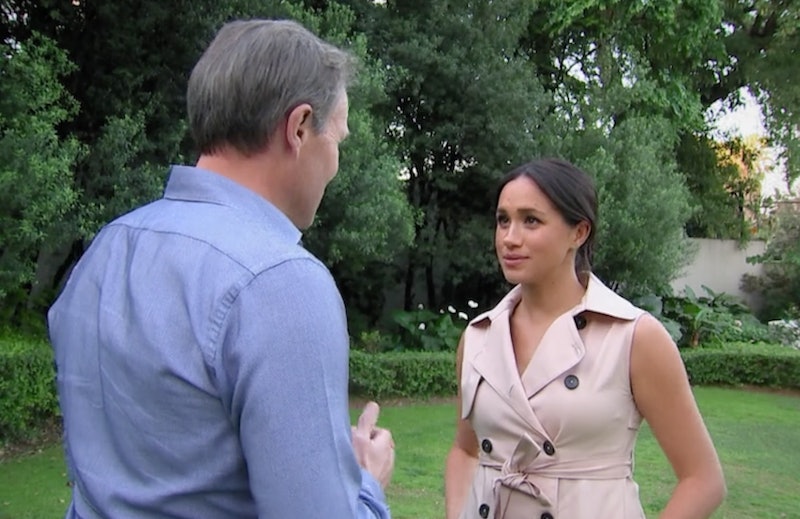 On Sunday Oct. 20, ITV aired their new documentary, Harry and Meghan: An African Journey, which followed the Duchess of Sussex and Prince Harry on their recent trip to the continent in late September. In it, both royals spoke candidly about the difficulties of existing in the public eye, with Meghan discussing how hard she has found it, especially since giving birth to her son Archie, and Harry opening up about his relationship with his brother. And, in one of the most thought-provoking moments, Meghan revealed that friends warned her about dating Harry because of the British tabloid scrutiny they knew would come along with it.

During one of her interviews with host Tom Bradby in Harry and Meghan: An African Journey, Meghan discussed her experience of stepping into the role of Duchess, saying: "I didn't think it would be easy, but I thought it would be fair, and that's the part that is really hard to reconcile."

The racist and hostile undertones present in the coverage of Meghan are difficult to ignore, and over the past few months, a number of famous people have come forward to point out the unfairness in the press' treatment towards her, and her relationship with Harry. One of the most notable was Elton John, who said: "I’m calling on the press to cease these relentless and untrue assassinations on their character that are spuriously crafted on an almost daily basis." Others who have publicly backed Meghan and Harry include Serena Williams, Elle DeGeneres, and P!nk.

Elsewhere in the documentary, Meghan explained to Bradby that she had "very naively" dismissed her friends concerns when they warned her of how the British tabloids can ruin people. She said:

"When I first met my now husband, my friends were really happy because I was so happy. But my British friends said to me: 'I’m sure he’s great. But you shouldn’t do it because the British tabloids will destroy your life.'"

Going through extreme scrutiny while becoming a mother for the first time has been "hard," Meghan told Bradby.

"Look, any woman — especially when they are pregnant — you're really vulnerable and so that was made really challenging, and then when you have a new born — you know? And especially as a woman, it's a lot," she said.

When Bradby asked how she was coping, Meghan replied by thanking him for asking, because not many people had. "But it's a very real thing to be going through behind the scenes," she said. When Bradby went on to ask if it's fair to say, then, that she has been struggling, Meghan simply responded: "Yes."

During the documentary, Bradby also asked Harry about similar subjects. When asked whether he was worried that Meghan was facing the same pressures as his mother Princess Diana, Harry replied:

"I will always protect my family, and now I have a family to protect. So everything that [Diana] went through, and what happened to her, is incredibly important every single day, and that is not me being paranoid, that is just me not wanting a repeat of the past."

Harry also touched on the rumours of a clash between himself and his brother Prince William, Duke of Cambridge. Harry didn't deny the rumours outright, instead saying: "We are brothers, we will always be brothers," before adding that they have "good days" and "bad days." Harry said: "We are certainly on different paths at the moment, but I will always be there for him as I know he will always be there for me." He made it clear that he loves brother "dearly" and "the majority of the stuff [tabloid rumours] is created out of nothing."

More like this
New Details About Jeremy Renner's Snowplow Accident Reveal The Actor's Intentions
By Sam Ramsden
Yes, You Can Stream ‘To Leslie’ In The UK Now
By Sam Ramsden
This Pre-'Love Island' Video Of Olivia & Zara Together Changes Everything
By Bustle UK
Everything To Know About The 'Daisy Jones & The Six' TV Series
By Maxine Harrison and Brad Witter
Get The Very Best Of Bustle/UK