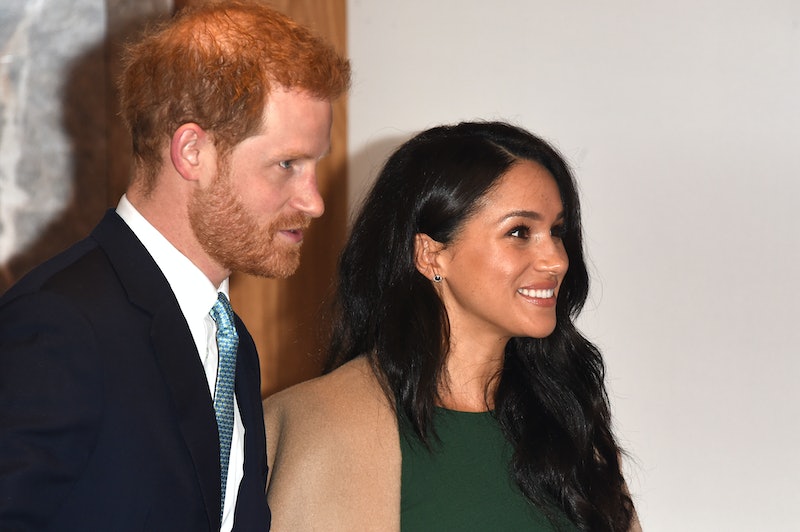 Meghan Markle may be a duchess, but she's the queen of re-wearing outfits. The Duchess of Sussex went on a dress recycling spree while in Southern Africa with husband Prince Harry, and it's not changing now that she's back. Meghan Markle rewore her engagement dress, and the frock is as classic and gorgeous as ever.

On Oct. 15, Markle and Prince Harry attended the 2019 Wellchild Awards, an event that honors the inspirational lives of ill children and those who support them in the UK. This is the couple's second time attending the event together. Last year, Markle made headlines when she chose to wear a sleek, all black Altuzarra pantsuit to the event appearing to channel her late mother-in-law's, Princess Diana's, style. This time, her look is notable not just because she's got great style, but also because it's a full rewear.

Meghan Markle's green engagement dress made its first reappearance since she and Prince Harry announced that they were to marry back in Nov. 2017. The P.A.R.O.S.H. frock features a sheath silhouette and a bow twisted at Markle's waist. When she and Prince Harry announced their upcoming marriage, she paired the frock with a white Line the Label coat. However, for the awards, she chose yet another rewear, the Sentaler coat she wore for Christmas Mass in 2017.

Seeing Markle in a piece she's worn before has become rather common over the past few weeks. Earlier in October, she and Prince Harry went on a royal tour of Southern Africa. While there, Markle reportedly wished to remain low key. To do so, she replaced her engagement ring with a markedly smaller, more delicate turquoise ring, but she also seemed to have translated that desire into her fashion as well.

During the pair's time in Southern Africa, nearly all of the Duchess of Sussex's wardrobe consisted of either affordable pieces or items she'd worn before. From her Martin Grant striped Maxi dress and the Mother denim she often dons to her Castañer wedges, the tour was packed with items already hanging in Markle's closet.

Now, she's grabbed her engagement dress for a rewear and she couldn't look more stunning. Duchesses — they're just like us!