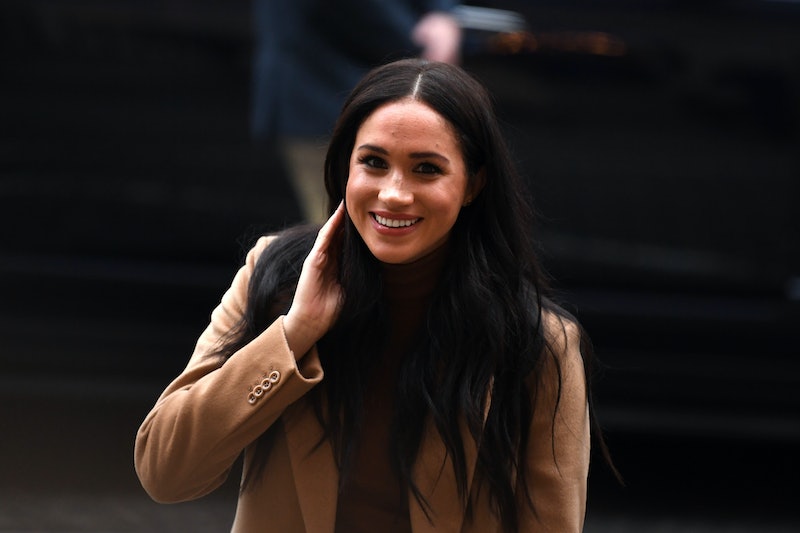 In case you missed the teeny, tiny story that Meghan Markle and Prince Harry are stepping back from the royal family, surprise — they are! And while Prince Harry has been busy with his family figuring out their exit strategy, Meghan Markle made her first appearance in Canada since the news broke while wearing a Suits sweater. The Duchess of Sussex paid a previously undisclosed visit to a women's center in Vancouver wearing chic, minimalist separates, and one of them just so happened to be from her time as an actor on Suits.

According to Fashionista, Markle visited the Downtown Eastside Women's Centre in Vancouver, an organization that helps to provide a safe space for women as well as basic needs and advocacy in what the agency calls an area of Vancouver with a "disproportionate level[s] of poverty and extreme marginalization." During her time there, Markle sat down for tea to discuss issues facing the women of the community. Following her visit, the Downtown Eastside Women's Centre posted a photo of the Duchess of Sussex smiling with the women she met with, and fans quickly recognized her outfit.

According to Twitter user Laura Ashworth (and confirmed my fashion site Meghan's Mirror), Markle's sweater is The Row 'Bea' Sweater that she wore while playing attorney Rachel Zane on Suits. According to So Many Thoughts' Elizabeth Holmes, it may not be the only piece from the day that's from her Suits wardrobe.

In her Instagram stories, Holmes points out that prior to her visit to the center, Markle boarded a seaplane to get there. While out in the Canadian cold, she donned a Barbour jacket and Cuyana bag that are both rewears according to Holmes and could have made up parts of her wardrobe while she was in the country filming Suits.

While the visit wasn't an official public outing, Markle's visit to the women's center marks the first time she's been out and about in Canada since returning to baby Archie. The Duchess flew back to London with Prince Harry for a visit to Canada House which marked her first royal appearance of 2020.

Markle's ensemble for the visit ultimately sparked speculations that the Queen may be offering the Duchess an olive branch when she chose to wear the same brown tones to church following the Sussexes announcement.

With Markle and Prince Harry's future in terms of official royal appearances is a bit hazy, seeing the Duchess out and about in Canada is a major moment for her fans. While she may not be a senior member of the royal family any longer, she's still continuing her charitable work in her new part-time home.