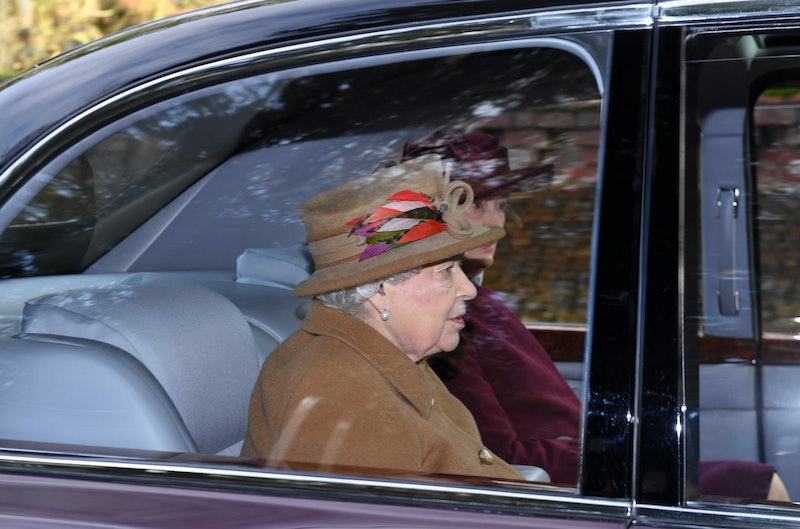 There's a lot going down with the British Royal Family. According to reports, the family is set to gather for discussions on the Sussexes' decision to step down as senior royals. While there is still much speculation regarding the family's reaction to the news, the Queen's church outfit may have been an olive branch to Meghan Markle, according to royal style expert and So Many Thoughts creator Elizabeth Holmes.

Prior to the reported meeting at Sandringham on Jan. 13, Queen Elizabeth II attended church services. Typically, when the British monarch makes appearances, even private ones like the trip to church, she wears bold and bright colors. According to PopSugar, the queen's daughter-in-law, the Countess of Wessex explained that the monarch wears these vibrant shades so even those far back in the deep crowds she attracts can spot her. On Sunday, she did the opposite.

When arriving to church at Sandringham, the queen was seen wearing a very non-queen like color: brown. She chose a camel-toned coat and matching hat, which is a major departure from her typical color scheme. Just a few weeks ago, she chose a sherbet lemon hue for church. According to So Many Thoughts' Elizabeth Holmes, the queen's choice may have been a signal to Meghan, the Duchess of Sussex.

In her Instagram annotations of the royal's ensemble, Holmes notes the much more somber hue, but instead of viewing the color as a way to express solemnity, Holmes argues that it's a nod to Meghan and a potential olive branch, especially given the queen's granddaughter-in-law's most recent look.

During a visit the Canada House to thank the country for her and Prince Harry's most recent visit, Markle donned a head-to-toe brown look that may have inspired the queen's coat dress for church at Sandringham.

Holmes goes on to explain in her posts that the queen's dressers don't make mistakes when it comes to color choices writing that they are, "meticulous about her ensembles," because she only wears a single color at one time. This leads Holmes to believe that the Meghan-esque look is no coincidence. Instead, she asserts that the outfit is likely a stylish peace offering to Meghan, especially given the timing of the look.

Holmes wasn't alone. Twitter user Rani-Kali also noted the twinning moment from the pair and added that they are "praying this is a message to the Sussexes that everything will be fine when she has a crunch meeting with Prince Harry tomorrow."

While it is unlikely that the queen will explain her decision to wear a camel-toned coat and hat, fans of the Duke and Duchess of Sussex — as well as the queen — may be able to glean some hope from this style moment.