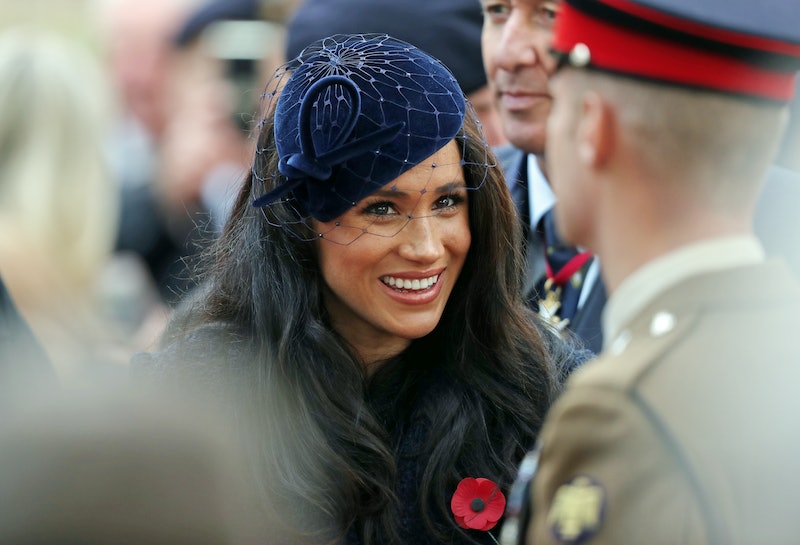 By now, it's clear that Meghan Markle has some staple items in her closet. Whether it's her Castañer wedges or her BOSS leather skirts, if Markle likes it, she's going to rewear it. Her most recent repeat? Her favorite Tamara Mellon boots.

According to Harper's Bazaar, Markle and her husband, Prince Harry, attended a service at the Field of Remembrance located at Westminster Abbey. The event honored fallen soldiers from World War I and is one of the many occasions leading up to Remembrance Day on Nov. 11. For the somber event, the Duchess of Sussex chose to keep her color palette muted opting to wear a navy Sentaler coat (another favorite brand), black dress, and black leather Tamara Mellon boots. She added a velvet, deep blue Philip Treacy and the traditional red Remembrance Poppy pin to her coat's lapel.

Markle's boots (and her coat) are yet another example of the Duchess sticking with brands she is familiar with and loves. The practice is common for Markle who has recently been on quite the rewear spree that seems to have begun while she was on the royal tour in South Africa. While yes, the Duchess does certainly wear her fair share of affordable pieces, her Tamara Mellon boots, well, they're not one of them.

The exact Tamara Mellon boots she's wearing are the High Knee Nappa boots, and they ring in at a cool $795 making them a bit less expensive than the Kindred calf hair boots she's also been spotted wearing. If you do want to splurge on a pair of long lasting, luxe boots, though, you can shop the Nappa style at the Tamara Mellon website.

If you haven't got nearly $800 lying around, though, there's still some good news. The boots are a classic, slouchy leather style which makes finding alternative looks fairly simple.

This pair from Saks Fifth Avenue are a fourth the price of Markle's Tamara Mellon boots and incredible similar in heel design, leather, and calf style.

Shoppers can always depend on ASOS for fashion forward pieces at a great cost, and these slouchy boots are no different. While the calf design is slightly different, they are still near exact alternatives for Markle's boots.

If you want to save some serious cash while getting Markle's look, you can make some concessions such as not opting for leather. These knee-high boots from Target may be suede, but the scrunch design and color are still reminiscent of the Duchess's own.

While yes, you can snag Markle's exact Tamara Mellon boots, you can also find affordable alternatives to give you the Duchess style you crave without the royal price tag.