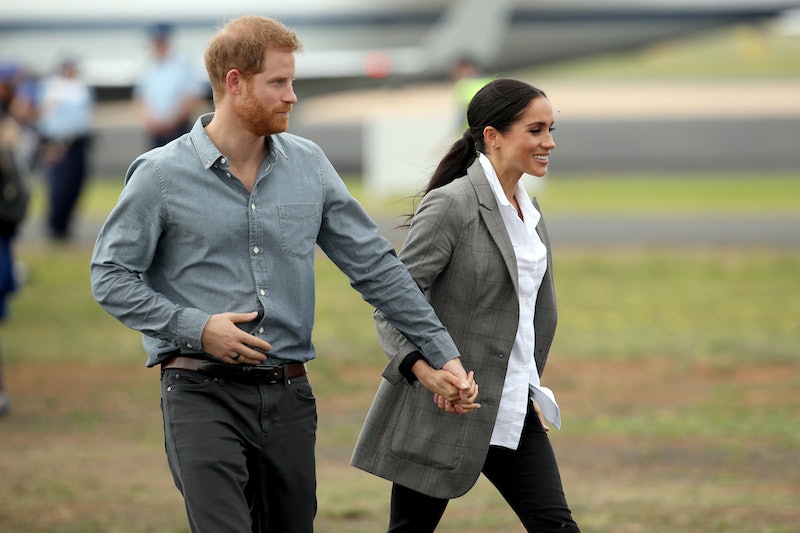 Meghan Markle has some famous BFFs. That's not a surprise given her acting background, but just because she isn't in Hollywood anymore, it doesn't mean she doesn't still support her besties. In fact, during she and Prince Harry's Australia visit, Meghan Markle wore a Serena Williams' blazer designed by none other than the tennis pro herself, and Markle looked totally classic rocking the Williams original.

While Markle and Prince Harry's Australian tour is certainly about more than just what the Duchess of Sussex is wearing, seeing her fashion choices isn't exactly a terrible thing for lovers of her royal style. She's worn everything from affordable Rothy's flats to tortoiseshell heels, and a super chic cream sheath dress, and fashion lovers are taking notice. In fact, the dress was so popular that it crashed designer Karen Gee's website, and the Rothy's flats she wore are affordable and still up for grabs on the brand's site.

Now, she's worn another affordable find in the Serena blazer by Serena Williams. The piece is part of Williams' eponymous line named Serena (of course). The famous and talented tennis player shouted out Markle with a photo of both the Duchess and herself rocking the blazer on her Instagram account.

The charcoal grey blazer features a subtle plaid print with buttons at the end of the sleeves as well as large pockets on the sides. It's designed to be a bit oversized which makes Markle's decision to wear it a perfect choice. After all, the Duchess did just announce her pregnancy. While she's just barely showing, rocking oversized and still stylish pieces could just end up being a maternity staple for Markle. Plus, even if you aren't preggers, who doesn't love a comfy but still structured piece?

The best things about the blazer may not even be that it proves that Markle and Williams love when women support other women (but it's pretty close). The great news is that you can actually shop this blazer, and it's pretty affordable to boot.

According to the Serena website, the blazer, called the Boss Oversized Blazer, retails for just $145. For a jacket like this one, that's a total steal. While the piece is currently sold out (because duh, Makrle wore it and it's a Serena Williams design), don't fret. You can sign up with your e-mail address to be notified when the blazer is back in stock.

Markle wearing the blazer isn't the first time there two friends have supported one another. Back in September when Markle's cookbook project, Together, with the Hub Community Kitchen launched, Williams took to her Twitter account to sing the Duchess's praises and promote the cookbook. So sweet, right?

If you've been looking for the perfect pair of celebrity BFFs to love, you probably just found them in Meghan Markle and Serena Williams. From supporting one another's projects to attending weddings, these two women know how to support one another (and others ladies, too). Why not join the fun and shop that Serena blazer?