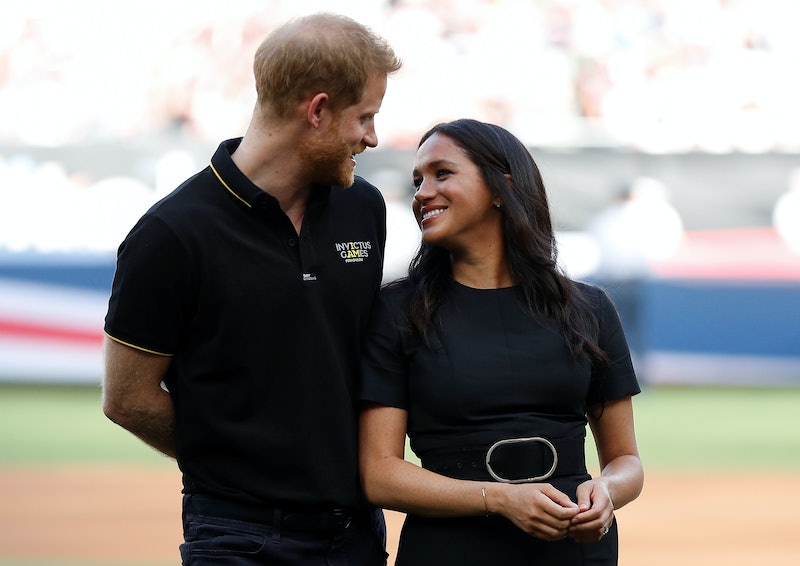 Sunday marks a royal birthday, as Prince Harry, Duke of Sussex turns 35. But Harry's not the only gift recipient today: to the delight of royal fans, Meghan Markle's birthday message to Prince Harry included an unseen photo from baby Archie's christening. And yes, it is extremely cute.

On the Sussex Royal Instagram account, the Duchess of Sussex shared a sweet birthday tribute to her husband: "Your service to the causes you care so deeply for inspires me every day. You are the best husband and most amazing dad to our son. We love you ❤️Happiest birthday!"

Accompanying the message are nine photos from Prince Harry's life, including a previously unseen moment from Archie Harrison Mountbatten-Windsor's christening in July, taken by royal photographer Chris Allerton. In the photo, a smiling Meghan holds Archie on her knee, while Harry crouches in front of them.

The post also includes a photo of Princes William and Harry as teenagers (William marked his brother's birthday on the Cambridge Royal Instagram account, with a photo of the two on Harry and Meghan's wedding day captioned, "Wishing a very happy birthday to The Duke of Sussex today!") In the top left is a photo of Harry as a baby, carried by his mother, Princess Diana.

Speaking of Princess Diana, Meghan paid a sweet tribute to her late mother-in-law at the launch of her charity clothing collection earlier this week. First, some context, if you've been off the internet of late: Meghan created the capsule collection with Smart Works, a charity that provides clothing and interview training to unemployed women, particularly those referred from job centres, shelters, mental health charities, care homes, prisons and other organisations.

With every sale of the seven pieces the Duchess of Sussex designed, alongside the brands John Lewis, Jigsaw, Marks & Spencer, and Misha Nonoo, a corresponding outfit will be donated to Smart Works. (And while some items have sold out, there's still a chance to get hold of several other pieces in the collection.)

"I am excited to celebrate the launch of another initiative of women supporting women, and communities working together for the greater good," Meghan said in a statement. "Thank you to the four brands who came together in supporting Smart Works on this special project — placing purpose over profit and community over competition. In convening several companies rather than one, we’ve demonstrated how we can work collectively to empower each other — another layer to this communal success story, that I am so proud to be a part of."

So how does Princess Diana come into this? Meghan's commitment to charity work makes her awfully similar to her late mother-in-law, and the Duchess of Sussex wore two pieces of jewellery from Diana's collection to the launch of the Smart Works range, held at the John Lewis flagship store in London.

Alongside a white shirt from Misha Nonoo and black Jigsaw trousers — both from the Smart Works capsule — Meghan wore a gold cuff and a pair of gold butterfly earrings, both formerly owned by Princess Diana. Meghan's consistently sought to honour the memory of her mother-in-law, and wearing her jewellery on such a major occasion seems like another thoughtful way to do just that.