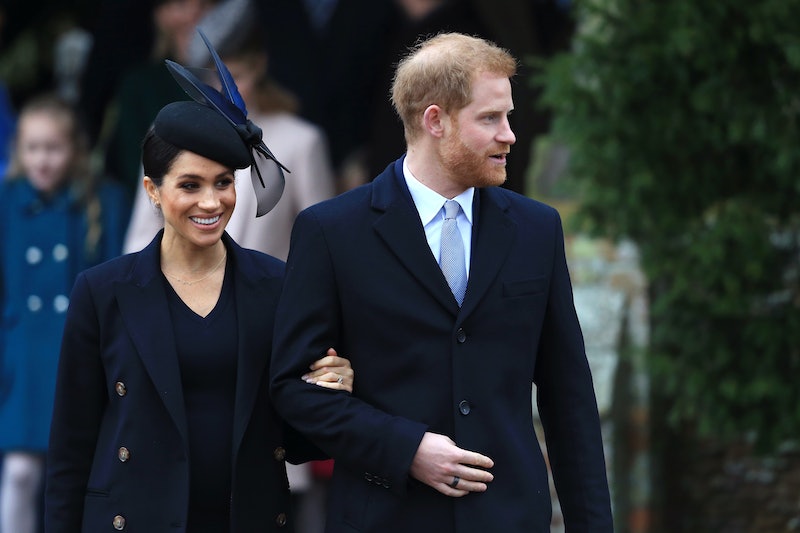 The royals were out and about on Christmas Day for church services — dressed in their holiday best. Prince Harry and Meghan Markle were expertly coordinated in navy blue. Harry wore a blue suit, while Markle's Christmas Day 2018 outfit included a navy blue dress and a Victoria Beckham coat, according to PEOPLE.

Markle finished her chic and classic look with matching accessories, including a fascinator and a structured, black leather powder box, the latter of which was also by Victoria Beckham. However, Markle's Christmas Day ensemble featured shoes that she hardly ever wears.

Markle wore black boots with a bit of a slouchy shape. They were an excellent choice of footwear for her overall dark attire.

Markle has essentially favored pumps and heels throughout her royal appearances and public duties over the past year or so. That said, we have seen Markle wear black boots in the past. She wore a pair last year with a beige skirt and black top. She also rocked caramel-colored suede boots for Christmas 2017. Therefore, boots seem to be her holiday "go to."

Black boots are certainly part of her sister-in-law Kate Middleton's fashion playbook. We often Middleton in a variety of boot styles while on the go. So while there has been plenty of gossip about an alleged rift between the two dominating the press, which the palace itself shut down, they clearly share good taste in shoes.

What a gorgeous duo. They were perfectly matched with their clothing. It's not the first time that Meghan and Harry have twinned with their attire. During their tour of Australia and New Zealand this past fall, their outfits were coordinated much of the time.

The Duchess of Sussex sure knows how to rock a boot. Her footwear was a fine finish to a fabulous outfit. Seriously, she and Harry matched from top to toe.

It was fun to see Markle switch things up with her shoes. It was also amazing to see Markle and Middleton celebrating the holiday as a united front.

Here's a closer look at Markle's fascinator and her signature bun.

Actually, it was Markle's smile that was the best thing about her Christmas Day 2018 look.

It's tiny but oh-so-fabulous.

Markle's 2017 Christmas Day outfit also featured a coat and boots, with additional matching accessories. The color palette was much lighter — but it was still expertly executed.

Markle wore slouchy black boots with a long, tan skirt, a black top, and a black belt back in December 2017, as well.

Markle doesn't do boots or booties on the regular. But when she does, it's always a statement pair. While in Australia on the royal tour, she opted for these affordable J. Crew booties, which quickly sold out. Because the Meghan Markle Effect is a real and actual thing.

Here's another look at Markle doing boots. She was all about balance with this outfit, mixing skinny jeans with a voluminous coat for this look.

While Markle has mastered the art of wearing heels with her OOTDs, you can't help but love how she slays a pair of boots. Her Christmas Day 2018 outfit is further evidence of that.