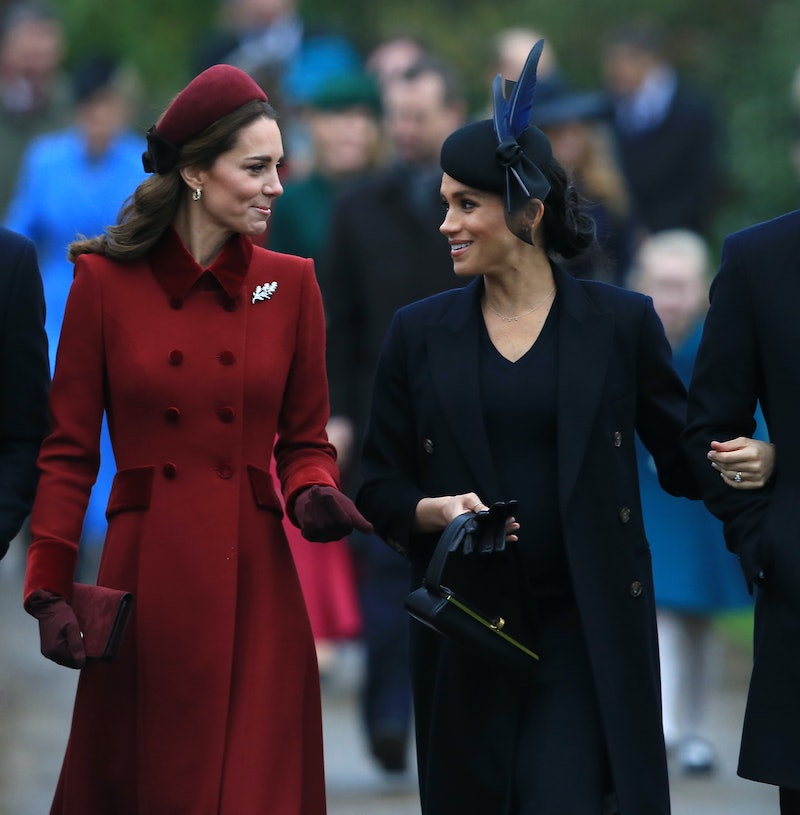 It's the most wonderful time of the year for royal fashion lovers. Okay, so maybe any time there's a royal wedding, it's the best time of the year, but don't underestimate Christmas. Royal festive fashion means winter coat inspo and a look at Meghan Markle's Christmas hat which will basically have you feeling that it should be the holiday season all year around.

If you didn't already know — because let's be honest, the royals are busy people —, the British royal family has several Christmas traditions that they adhere to. They spend their holiday break at their winter estate named Sandringham about two hours outside of London. The queen typically takes a train there before any of the other royal family members who then join her later.

During their time at Sandringham, they attend two different church services, a private service for the family, and a Christmas Mass that's public. It's this public Christmas Mass that fans of royal style finally get to see what the women of the family have chosen to wear, and it's almost always festive AF.

This year, Meghan Markle's Christmas hat was part of an all navy monochromatic dream, and so different from the hate she wore to her first Christmas Mass when she was engaged to Prince Harry last year.

While the designer of Markle's Christmas hat hasn't been revealed yet, it's a gorgeous piece that compliment her Victoria Beckham outfit. Hello, the hat has got feather for crying out loud!

The headwear features a similar design to the one she wore to last year's Christmas Mass, but instead of the swirling, structured piece on 2017's Phillip Treacy creation, her 2018 Christmas hat featured two large feathers.

Last year, when Markle attended Christmas Mass as a soon to be member of the family, she went ultra-neutral in a gorgeous, belted cream coat with camel hued Stuart Weitzman boots and a matching hat from Treacy. The look was basically a neutral lovers dream, and contrasted with her sister-in-law Kate Middleton's ensemble quite a bit. Now, she's totally switched things up and gone much darker in hue for her Christmas ensemble.

As for Markle's sister-in-law Kate Middleton, she went ultra-festive in a crimson headband instead of a traditional hat. Middleton's Christmas hat and outfit aren't the first time she's been dressed festive this year, either. She wore an incredible plaid skirt earlier this holiday season. Honestly, Middleton definitely takes the cake when it comes to festive sartorial choices.

While Middleton may have chosen a more traditional Christmas color for this year's walk to mass, Markle's all navy look is totally on trend with its monochromatic theme, and plus, she's got actual feathers in her cap, so there's that, too.

Markle and Middleton both looked stunning as they celebrated Christmas as a family, and both of their chosen hats (or headbands in Middleton's case) are exactly why people love watching the royal family's fashion choices. You really never know what to expect. It looks like this Christmas, fans should have expected feathers.