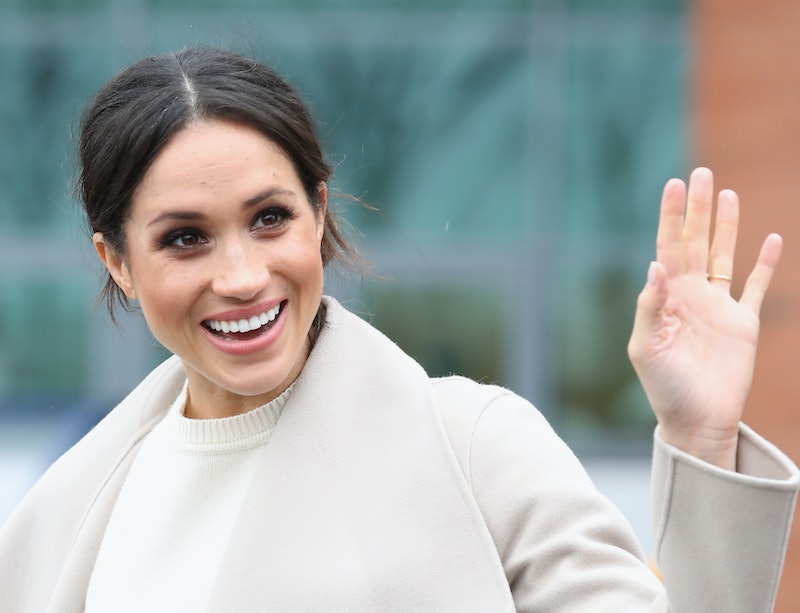 The British Royal Family is making the Markle family feel right at home. According to People, Meghan Markle's dad is receiving a coat of arms before his daughter's wedding to Prince Harry. The traditional gift is typically customized and recognizes the entire family, but is presented to the father of the family. Bustle reached out to both Kensington Palace and the College of Arms (the official register for coat of arms in the U.K.) regarding the Markle family coat of arms, but did not receive a response at the time of publication.

People reports a coat of arms is always given to the father of the bride before a royal wedding. In this case, Thomas Markle, the Suits star's dad, will reportedly receive the special present. Seeing as Kate Middleton's father, Michael Middleton, received a coat of arms before her 2011 wedding to Prince William, it's probably safe to say Thomas will, too.

According to the BBC, the Middleton family was gifted their coat of arms (below) over a week before Kate's wedding to William. Their customized design featured three acorns (one for each child, Kate, Pippa Middleton, and James Middleton), and a gold stripe honoring Kate's mom, Carole, and her maiden name, Goldsmith.

"Every Coat of Arms has been designed to identify a person, school or organization, and is to last forever," Thomas Woodcock, Garter King of Arms at the College of Arms, told People in April 2011. "Heraldry is Europe’s oldest, most visual and strictly regulated form of identity and it surrounds us in Britain, giving clues to our history and surroundings."

It's unclear which Markle family members will be included in the reported coat of arms and what it will actually look like. If it's supposed to represent Meghan's entire family, the design will most likely feature something for her parents, Thomas Markle and Doria Radlan. She also has two half-siblings, Samantha Grant (also known as Samantha Markle) and Thomas Markle Jr.

According to People, Meghan and Harry will receive a "conjugal coat of arms" after her family receives their coat of arms. However, it will probably take a few years for it to be unveiled. William and Kate's conjugal coat of arms wasn't revealed until September 2013, over two years after they married in April 2011.

As you can see below, and as explained by People, the design represents William and Kate "in heraldic terms as a married couple." Their coat of arms was approved by Queen Elizabeth II. It was crafted by the College of Arms and is a combination of William and Kate's individual shields. William's shield, granted by his grandmother, the Queen, on his 18th birthday is on the left side. Kate's is on the right and should look familiar, because it is her family's coat of arms.

This is William and Kate's coat of arms forever, but alterations can be made due to any changes in their responsibilities and roles as royalty. According to The Telegraph, a Kensington Palace spokesperson said in a statement: "The Conjugal Arms will be theirs forever, but as their circumstances and roles alter, elements of the accoutrements around the shields may change. In addition to their Conjugal Arms, Their Royal Highnesses also retain their own Coats of Arms to represent themselves as individuals."

According to The Telegraph, King of Arms Woodcock met with Michael and Carole to create the design. "The Middleton family particularly wanted acorns or oak and I think Catherine Middleton in particular was responsible for the idea of these oak sprigs," Woodcock said.

It'll be interesting to see if Meghan and her family give their input and what they choose for their coat of arms. Whatever is decided, there's no doubt having your own coat of arms would make anyone feel like royalty.

More like this
The Difference Between The Royal "Institution" & "The Firm" Shows Who's Really In Charge
By Savannah Walsh and Meguire Hennes
Tyler Perry Makes Rare Comment About Meghan Markle & Prince Harry's Love Life
By Radhika Menon
8 Photos Of Prince George & Princess Charlotte At Queen Elizabeth II's Funeral
By Jake Viswanath
The Prince William & Rose Hanbury Rumours, Explained
By Frances Stewart and Sam Ramsden
Get Even More From Bustle — Sign Up For The Newsletter