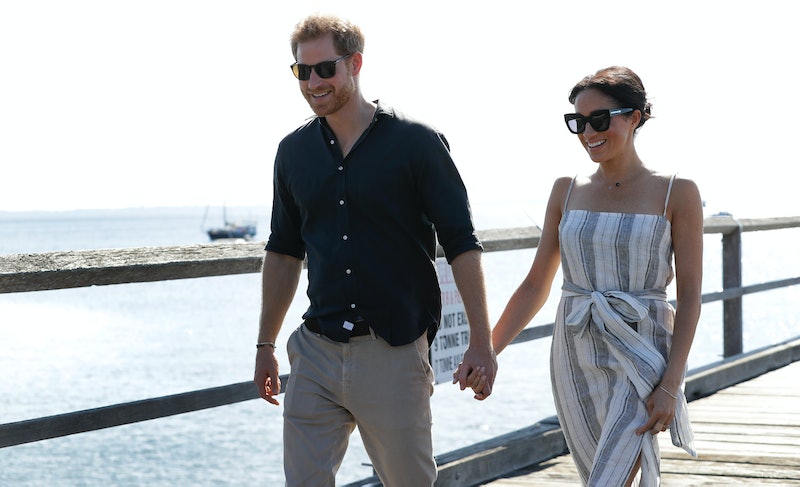 The Duke and Duchess of Sussex make it look so easy, but there’s no doubt that their royal tour across Australia, Fiji, Tonga and New Zealand must be exhausting. Armed with a smile, a quick joke and a hefty dose of PDA, the pair are every inch the modern couple the royal family needs — but even they need a break sometimes. It was announced recently that Meghan Markle would be changing up her schedule and opting out of a couple of events, leaving a number of Fraser Island engagements in Prince Harry’s capable hands. Given that she’s pregnant, I’m honestly in awe of the fact that she’s only just started slowing down. Meghan Markle’s day off on royal tour sounds like it was pretty well deserved and now that more details have emerged, I’m a little jealous too.

According to Hello!, Meghan apparently took a load off at the Kingfisher Bay Resort — an award-winning eco-resort located on Fraser Island. The hotel, whose parent business also runs a number of sightseeing tours on the island, seems like it really looked after her as she apparently “enjoyed a spot of whale watching” before retreating to the luxe getaway.

The outlet also raised the possibility that Meghan may have taken advantage of a spa day at the resort’s Island Day Spa, which offers hot stone massages, coconut vanilla exfoliation body scrubs, and very swish bio-hydra facials to rejuvenate tired skin. The spa revolves around “a wellness philosophy using natural Australian products” and brings “native Australian plant, fruit and flower extracts” into their relaxing sessions. So even if Meghan wasn’t out touring the rest of Fraser Island with Prince Harry, at the very least she may have been enjoying the local Australian culture (in an unusual way).

But actually it looks like Meghan might have spent her time a little differently. A spokesperson for the royal family told Hello!, “She is not sick or exhausted and is feeling fine, and in fact she spent some time preparing for the coming days of the tour while the Duke was out on duty.” Wait, so Meghan Markle took the day off but still did her homework? She basically sounds like the child my mother wishes she had and it’s pretty inspiring to see how well she’s taking to her new role in the

In the meantime, Prince Harry enjoyed the rest of the World Heritage-listed island and was greeted with a traditional Welcome to Country smoking ceremony by its indigenous Butchalla People. The Butchalla People, who call the island K’Gari (paradise), were photographed laughing and chatting with the charming royal.

Although the hotel referenced the fact that Meghan and Prince Harry were going to be visiting the World Heritage-listed island, they also shared a few details about the preparations they had made for their stay. They said on their website that “hundreds of excited guests” were staying at the Kingfisher Bay Resort, so here’s hoping Meghan actually got to relax away from the limelight for a little while.

They said, “Our team have been working behind the scenes to make sure that the resort grounds are ready for our royal visitors.”

Meghan didn’t have the whole day off though, as she rejoined Prince Harry for a walk along Kingfisher Jetty and she looked like her time off had done wonders. (The pregnancy glow is real.) As she wandered the famous landmark and said hello to visitors, she held onto her baby bump with a soft smile which warmed this gal’s heart.

A royal source told the Daily Mail, “We were concerned about the [roads] on the island which are incredibly bumpy and uncomfortable for anyone, let alone a pregnant woman. But the Duchess was very keen to re-join the Duke at the last engagement of the day to greet the people of the island.” I stan an overachiever.

With the Duke and Duchess having just landed in Fiji and just over a week left of their royal tour, it sounds like it’ll be pretty tiring and TBH I just hope they look after themselves. Fingers crossed they have a well-deserved break planned for afterwards.