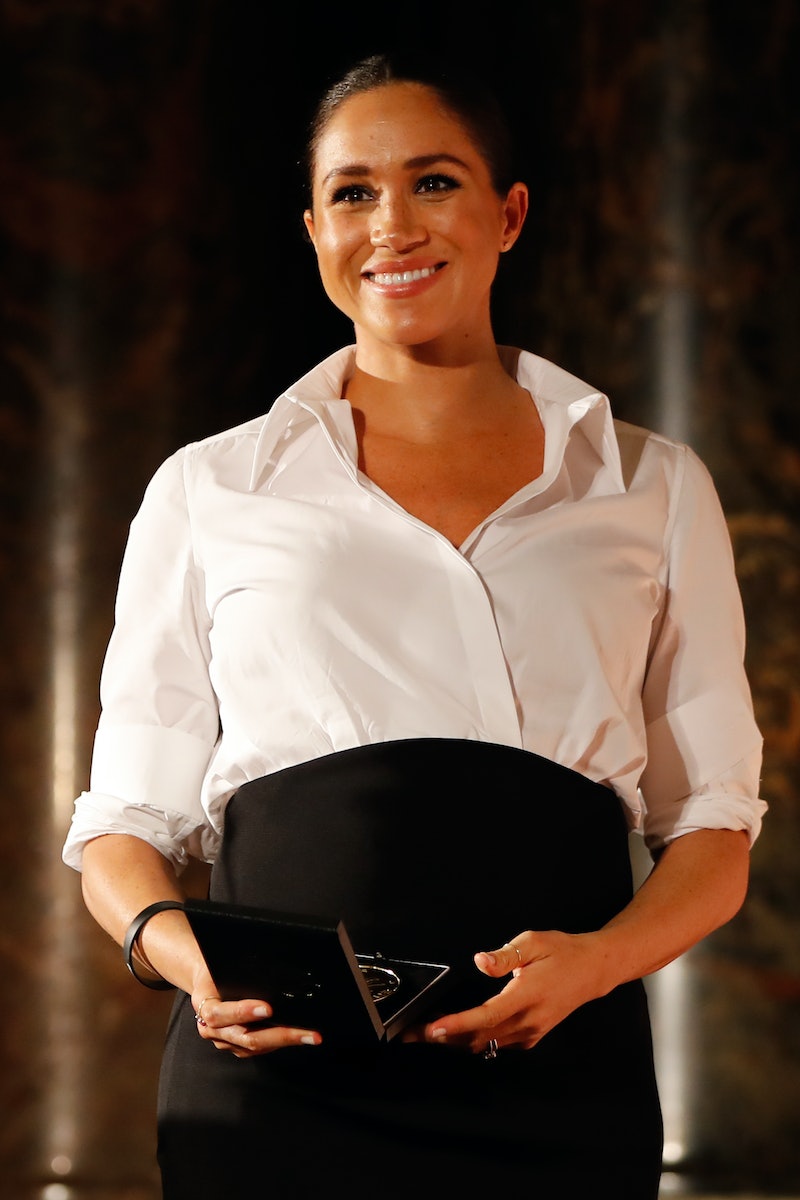 After a whirlwind trip to New York City for her celeb-filled baby shower and a visit to Morocco for a week of engagements with Prince Harry, Meghan Markle shows no signs of slowing down. Kensington Palace announced on Friday how Markle will celebrate International Women's Day. On March 8, the Duchess of Sussex will participate in a panel, hosted by King's College London, along with famous faces including musician Annie Lennox and former Australian Prime Minister Julia Gillard. According to the palace, the event will bring together "female thought-leaders and activists to discuss a range of issues affecting women today."

The Duchess herself has a long history with the holiday, dating back to her pre-Royal days. Just last year, Meghan and Harry traveled to Birmingham in England, where they met with a group called the "Stemettes", which promotes female involvement in science, technology, engineering, and math. In 2015, Markle spent the holiday giving a speech at a UN Women's conference about gender equality and proclaimed herself "proud to be a woman and a feminist." Clearly, this day is a special one for the royal, and from Kensington Palace's description of this year's panel, it will be a perfect platform for her.

Per People, a statement from the palace indicates that the panel will cover a wide range of topics. "In front of an audience of students, opinion formers, and young leaders, Her Royal Highness will join the panel to discuss the importance of International Women's Day, and the spotlight it can bring to obstacles which still affect female empowerment across the world, including access to education and limitations within employment. The discussion will also cover the positive opportunities that come when women are given wider access and equal opportunity, whether that be in the UK or elsewhere in the world."

The panel feels very on-brand for the expectant Duchess, whose feminist advocacy has become a core tenant of her royal identity. In her official royal biography, her work as a UN Women's Advocate for Women's Political Participation and Leadership is on full-display as is her commitment to empowering women everywhere through organizations including One Young World and World Vision. And lest we forget, the oft-told tale of an 11-year-old Markle protesting the sexist language in a Proctor & Gamble soap ad. Her Royal Highness's feminist roots run deep.

International Women's Day events like these are just another way Markle continues to embrace who she is under heightened scrutiny of her every move. Every step of the way, her voice is heard. From her first official appearance with Prince Harry, Prince William, and Kate Middleton where she gave a shout out to #MeToo and Time's Up, to her speech about women's suffrage on an Australia-New Zealand tour, Meghan is speaking truth to her passions.

It is sure to be another inspiring moment for the Duchess of Sussex come March 8, where her presence on the King's College London panel will provide insight into where she sees the future of female empowerment headed. Sadly, tickets for the panel won't be available to the general public. But one thing is certain: when Meghan lends her voice to something, the world listens.