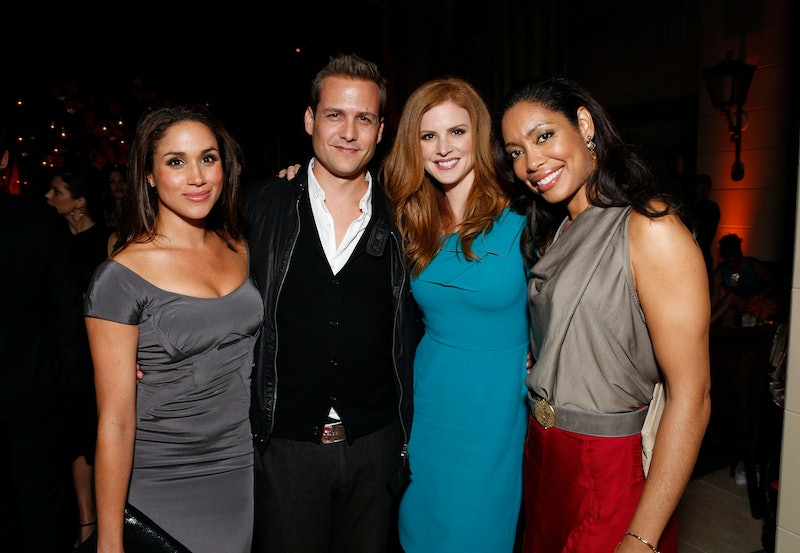 Having a baby is a pretty exciting time, especially the first time round when everything is entirely new. It's also a prime time to celebrate all of these things with your pals and, dare I say it, have the perfect excuse for a party. Not that anyone needs an excuse to party in this day and age, but when your party is celebrating the upcoming birth of a brand spanking new royal, you know it's about to be lit. Although many have remained tight-lipped about the event, Meghan's Suits co-star Sarah Rafferty has spoken about her baby shower.

No big deal right? It's just a baby shower. A pretty regular event. OK jk, huge deal. Invites to this event were like flipping gold dust and you can only imagine how many acquaintances were desperate to get on that list. One lucky guest was Meghan's close friend Rafferty, who previously worked on the TV show Suits with the Duchess. And Rafferty, who plays lawyer Donna Paulsen on hit show, was brimming with joy when asked about the pre-birth party. Speaking to Entertainment Tonight about the event, she only revealed a few details, but, y'all, what she said was more than enough.

When Entertainment Tonight asked is Meghan's other co-star, Rachel Harris, whether she would be up for getting her and Markle's children together for a playdate, the actress joked: "She can totally hop on a private jet, bring her kids in. Why not?" Before another Suits star, Patrick J. Adams, jumped in with: "Maybe at her house, it's a little bigger."

Anyway, back to the matter at hand. Y'all, this baby shower was probably one of the most discussed of all time and, TBH, it makes a hell of a lot of sense why. When the press weren't covering dumb, predictable stories of non-existent female feuds involving Meghan, they were focussing on this event. It was arranged by her her pals in the U.S, and guests included BFF tennis ace Serena Williams. The intimate and uber-private shindig was held in the Mark Hotel in New York City and was a perfect chance for Markle to catch up with closest pals back home before celebrating the arrival of a tiny Meghan/Harry mash-up.

Although the exact due date of the new baby has not yet been announced, the royal family officially announced the pregnancy saying they would be stocking up on nappies (lol not quite) in Spring 2019.

Many are of the belief that the baby is due in April, which would mean basically that we are in the last run up to the big day. A fact that is pretty impressive considering that Meghan has absolutely not shirked her royal duties during her pregnancy. Not even in recent months, when she has been out and about showing support for charities and events. Oh, and then there were those international tours.

I guess you are wondering if there is going to be a pre-baby celebration over this end of the pond? Well, looks like there is a solid possibility that, yes, there will be a sort of baby-shower-type event, but that it will be even more low key than the New York one. It'll probably only family, and organised by Kate Middleton, as Bustle reported last week.

But what about Meghan's fella? He has also been busy with royal engagements, and if the couple's recent public appearances are anything to go by, they are loved up as ever. Also they seem like pretty big fans of hanging out with kids, which should make being a parent decidedly more enjoyable.