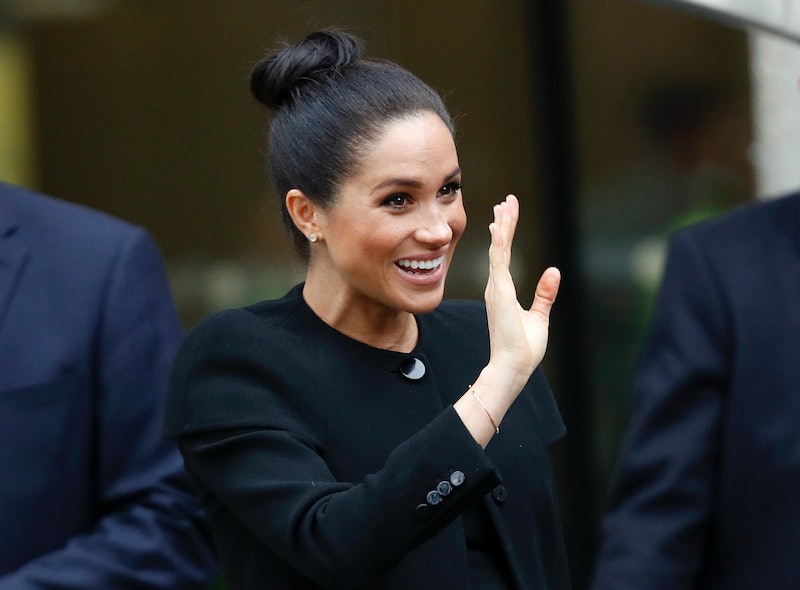 Meghan Markle may have traded in the U.S. for the U.K. when she married Prince Harry, but the Duchess of Sussex hasn't abandoned her American pals. During a secret trip to New York City for a baby shower, Markle went to dinner with Serena Williams and friends on Tuesday, Feb. 19. News broke on earlier that day that Markle had come to New York City on Friday and was having an intimate baby shower thrown by her friends from this side of the pond. And following the afternoon celebration for the royal baby, Markle apparently decided to keep the party going with a swanky dinner, Williams by her side.

According to PEOPLE, Markle was spotted meeting up with tennis pro Williams, Jessica Mulroney, and Markus Anderson at Ralph Lauren's restaurant The Polo Bar. As The Independent reported, Markle and Williams have been friends since meeting at the 2010 Super Bowl before the Duchess was even an actor on Suits. The pair have maintained a close relationship for nearly a decade. So, of course, Williams attended the royal wedding back in May 2018 and was reportedly there for Markle's American baby shower on Tuesday. After the festivities, it seems that they decided to prolong their quality time even further with a dinner in New York City.

Although Williams is quite famous in her own right, with a record number of Grand Slam titles under her belt, her friendship with Markle does provide some insight on the highly-protected royal. For instance, Williams tweeted her support of Markle's charitable cookbook Together, writing, "I could not be more excited about it and proud of you." Meanwhile, Williams' clothing line also released a "royal" hoodie that certainly seemed inspired by her pal. And Markle reciprocated the fashion love when she wore a blazer from Williams' clothing line while on a royal tour in Australia with Prince Harry.

They've also supported one another in athletic endeavors. Markle attended Wimbledon 2018 with her sister-in-law Kate Middleton to cheer on Williams during her match against Germany's Angelique Kerber. And Williams and husband Alexis Ohanian joined Markle at a polo match in England to support Prince Harry and Prince William last June. Days after her disagreement with an official at the U.S. Open in the fall, Glamour reported how Williams spoke to Australia's The Sunday Project about her friendship with Markle. "We were actually just texting each other this morning," Williams said. "We have known each other for a long time, but we really kind of are relying on each other right a lot recently."

Although baby showers aren't commonplace for the royal family or for expectant British mothers in general, the American Markle embraced this celebratory tradition with her friends on Tuesday, according to Harper's BAZAAR. Along with dinner mates Williams and Mulroney, other famous female pals who were in attendance were Abigail Spencer and Priyanka Chopra Jonas.

Reportedly, Tuesday's gathering won't be the only baby shower for the princess. Harper's BAZAAR noted that royal contributor Omid Scobie has claimed that Markle will have a second baby shower in the U.K. As Scobie tweeted on Tuesday, this "smaller gathering" will reportedly occur after her and Prince Harry's trip to Morocco from Feb. 23 to Feb. 25.

As she's seven months pregnant, Markle's airplane travel most likely will be coming to an end soon. So this was probably her last trip to her home country before she gives birth. And thanks to good friends like Williams, she was able to celebrate this exciting life moment surrounded by people who love her during this trip to America.

More like this
Meghan Markle Gave An Adorable Lilibet Update
By Alice Broster and Sam Ramsden
Tyler Perry’s Birthday Note To Meghan Markle Mentioned Struggles She’s Overcome
By Brad Witter
Serena Williams Is Retiring From Tennis: “I'm Ready For What's Next”
By Marina Watts and Grace Wehniainen
Amanda Seyfried Says She Felt Pressured To Shoot Nude Scenes At 19 Years Old
By Jake Viswanath
Get Even More From Bustle — Sign Up For The Newsletter