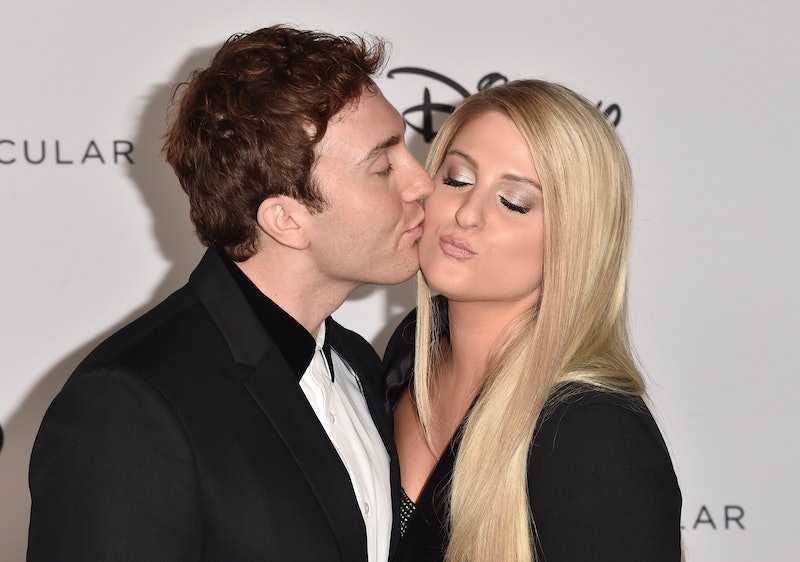 Christmas came early this year for Meghan Trainor and Daryl Sabara. The couple got married on Dec. 22, People reported, and celebrated with an intimate group of friends and family at their home in Los Angeles. They weren't just celebrating a wedding that day, though. It was Trainor's 25th birthday as well, which definitely makes their anniversary that much easier to remember from here on out.

Sabara proposed to Trainor on Dec. 22, 2017, AKA the singer's 24th birthday — exactly one year before their wedding. No pressure or anything but like, December is forever going to be a *major* month for them. Sabara's gift-giving game must be really strong. A birthday, an anniversary, and Christmas? All in the same week? Wow. Respect.

The couple shared details of their happy news exclusively with People, and were pretty ecstatic about finally tying the knot. "It's the beginning of an awesome, whole new life," Trainor told the publication. "I got way more than I ever wished for." Sabara added, "I'm the luckiest guy in the world." Cuties.

When asked what excited them the most about marriage, Trainor replied, "Just rockin' them rings!" Has anything ever sounded more relatable? "I'm really excited to say 'hubby' and 'husband,'" the singer continued.

As for Sabara, the Spy Kids star referenced his new wife's song "Dear Future Husband" in his response to People, jokingly telling the outlet, "I'm no longer the 'future hubby' — I get to just be the hubby, which I'm excited about!" Right you are, sir. Very exciting, indeed.

According to People, Trainor donned a wedding gown by Berta, along with Badgley Mischka heels and Norman Silverman jewelry. She then changed into a Rita Vinieris lace suit and comfy, casual sneakers from Aldo. Can we get some pictures though, please? Need to see all of the above ASAP.

Trainor and Sabara first started dating sometime around October 2016, and were set up by their famous mutual friend, Chloe Grace Moretz. "Chloe Grace Moretz told me she had a really, really nice friend," Trainor told Entertainment Tonight at the time. "I was like, 'That's crazy! I'm looking for a really, really nice guy," she said. "And she's like, 'You guys have to meet.' And we did. He's great!"

The couple got engaged a little more than a year later, and both shared a video of the special moment on their respective Instagram accounts. It'll probably make you sob some serious tears of joy, though, so make sure you've got some tissues nearby before you watch.

"Happy birthday to my soulmate," Sabara captioned the clip. "Thank you for changing my life forever and thank you for saying yes! You are the most beautiful fiancé in the world. I love you @meghan_trainor." Aww. *Sniff sniff*

"For my 24th birthday, the love of my life @darylsabara made all of my dreams come true," part of Trainor's own caption for the video read. "He proposed to me under a tunnel of beautiful Christmas lights and surprised me with my family and friends. I'm still in shock. I've never been this happy!"

Seriously, though — could they get any cuter? Congratulations you two!