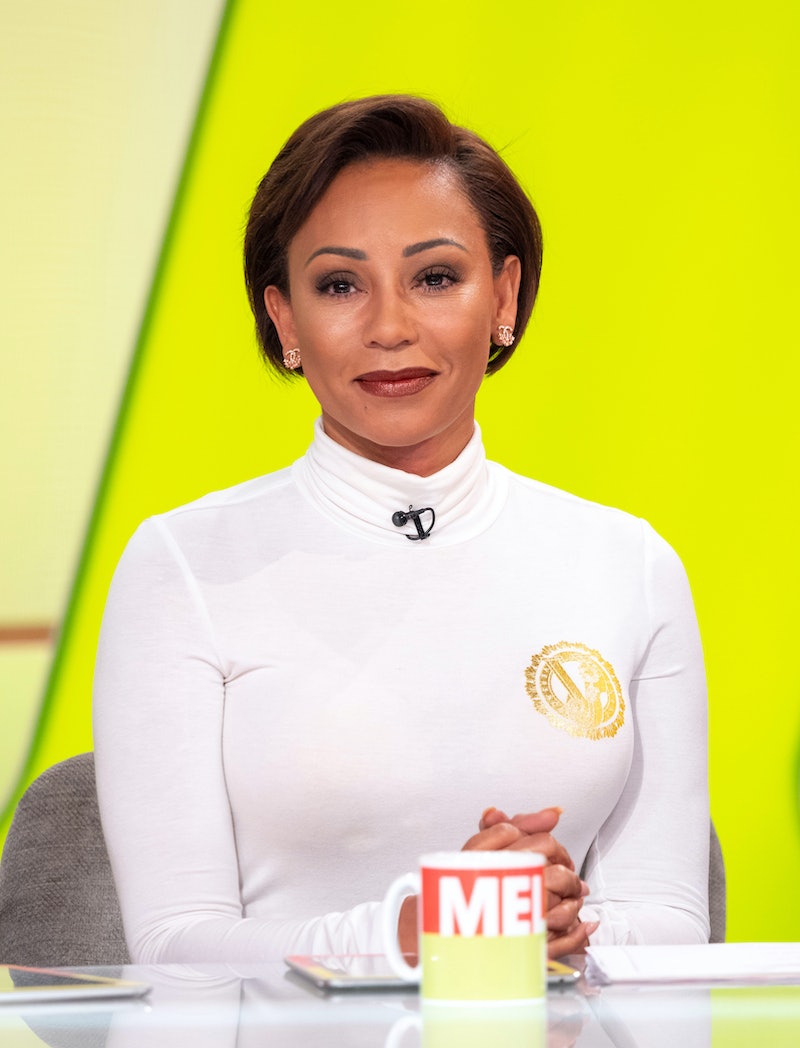 This month's been an momentous one for Mel B. First, the Spice Girls announced their enormous reunion tour, which promptly sold out. Then, she released her autobiography, Brutally Honest, which details amongst other things the trauma of domestic abuse. And yesterday, Mel B's BBC Woman's Hour interview saw her open up about abusive relationships, telling viewers, "I think abuse on any level should be spoken about, and you should know that you can get help."

Mel B — full name Melanie Brown — finalised her divorce from Stephen Belafonte in August this year, as People reports. In court papers, Brown alleged that Belafonte was physically and emotionally abusive, saying, "When something good would happen for me, he would beat me down to let me know he was in charge." The abuse also prompted Brown to attempt suicide in 2014, she said. According to the BBC, Belafonte's lawyers said the allegations were "nothing more than a smear campaign," calling them "outrageous and unfounded."

Speaking to Women's Hour, Mel B said, "I think it’s hard for women to admit things to themselves, let alone admit it to anybody else that they’re in a coercive, abusive relationship or marriage." Writing her book, Brutally Honest, was "very cathartic and very therapeutic," she added, saying, "My only option was to talk about it and to write about it because I didn’t know any other way out."

The singer said she hopes her autobiography will inspire others in abusive relationships to seek help, telling viewers, "There are options and you can get out, and by talking about it, hopefully, you do that for yourself."

At the end of August 2018, Mel B revealed she was going to rehab in order to seek treatment for post-traumatic stress disorder and issues with addiction. Writing her book forced her to revisit her trauma, she told the Sun, adding, "It has been unbelievably traumatic reliving an emotionally abusive relationship and confronting so many massive issues in my life."

"I’m not perfect, and I have never pretended to be," she said. "But I am working on being a better version of myself for my kids, for my family, and for all the people who have supported me."

In the Woman's Hour video, Mel B went on to reflect on the early days of the Spice Girls, naming "Wannabe" as her favourite song from the group. "It’s such an annoying, amazing, brilliant song that we wrote ourselves," she said. She discussed her iconic "Wannabe" video outfit, saying she paired Jean-Paul Gaultier trousers with a £2 lime green tank top. "I still have it," Brown revealed.

"I was never going to straighten my hair," Mel B said, explaining, "I wanted to make sure I was being authentic to myself and I was just being me." She added, "Curls are beautiful — they're always going to be beautiful."

Tickets for the Spice Girls reunion tour, as unsuccessful fans are probably keenly aware, sold out at a record pace, forcing the band to add a host of new dates. And Mel B's more than a little excited about that. "It just goes to show we have the most amazing fans," she told Woman's Hour.