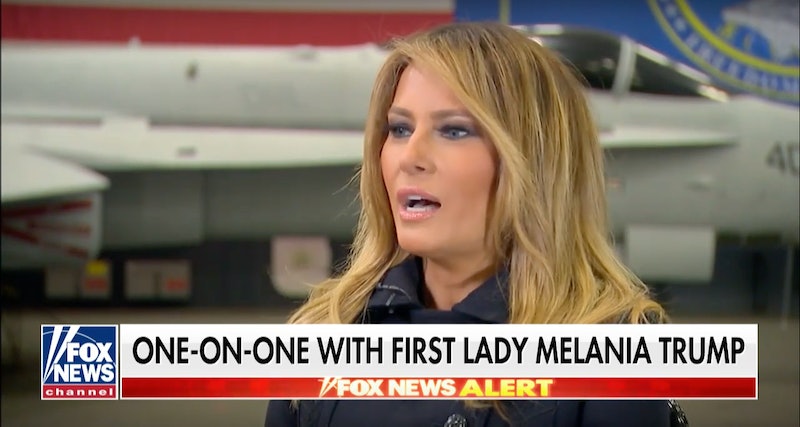 Serving as first lady pretty much guarantees your name is going to be in the spotlight, and often in pop culture as well. But that's not something that goes over well with everyone. During an interview on Wednesday, Melania Trump told Sean Hannity that she's not on board with "opportunists" throwing her name around.

Asked what the hardest thing she's had to deal with since becoming first lady is, she told Hannity, "I would say the opportunists who are using my name or my family name to advance themselves," specifying comedians, journalists, and authors among those who capitalize on her name. Echoing her husband, Melania Trump clarified that such "opportunists" don't hurt her, but "the problem is they’re writing history and it’s not correct."

"They like to focus on the gossip," she said, "and I would like that they focus on the substance and what we do, not just about nonsense."

Her assessment seemed to be a toned down version of the president decrying "fake news" from major outlets, calling the press the "Enemy of the People" and describing comedians who make fun of him in disparaging terms like "low-life" or "whimpering."

Trump, who also bore a fair amount of mocking after she described herself as "the most bullied person in the world" in an ABC interview in October, told Hannity that she "stay[s] true to herself," in the face of media criticism.

I do what I think is right. I know I will get the criticism — from the public or from the media — but I will do what is right and what I feel is right for the country and for the people.

She did however mention that she doesn't necessarily agree with her husband's blustering style of pushing back on opponents. "I don’t agree with his tone sometimes, and I tell him that," she said. "Sometimes he listens, sometimes he doesn’t."

Additionally, Trump explained in her interview with Hannity that she's not fazed by people she finds untrustworthy, whether in the White House or not. "That’s why I say I want to stay true to myself and listen to myself and what to do and what is right, what is wrong and live a meaningful life every day," she said.

This week was a busy one for the first lady, who delivered books for children as a part of the U.S. Marine Corps Reserves' Toys for Tots event, and read to patients at a children's hospital in Washington. According to The Washington Post, Hannity accompanied her to several events with military service-members before sitting down for their interview on the USS George H.W. Bush aircraft carrier to discuss her life as first lady.

The role of the first lady in the White House has varied over the years, from Nancy Reagan's "Just Say No" anti-drug movement to Michelle Obama's "Let's Move!" campaign to promote healthy childhood exercise and nutrition. Earlier this year, Trump unveiled her "Be Best" agenda to tackle cyberbullying and opioid abuse, and to promote general well-being among youth.