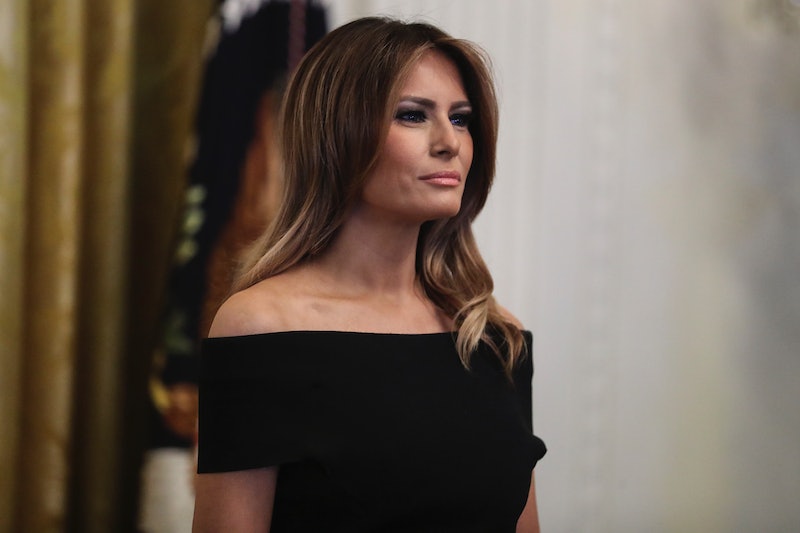 The First Lady has made children's well-being a priority during her time in the White House. In keeping with that pattern, Melania Trump visited Nicklaus Children's Hospital on Monday, unveiling a new "healing garden" that she said she hopes will bring "renewed strength" to the children who visit it.

The garden is officially dubbed the "Morton and Linda Bouchard Healing Garden" after donors referenced in a White House statement. At the same time, the hospital's cardiac intensive care floor was also renamed after the Esrick Dream Foundation, which has also, per the statement, donated money to the hospital's cause.

"It is because of the generous donations of people like Morton and Linda Bouchard, or Steve and Kiki Esrick of the Dream Foundation, that hospitals can offer more care and comfort to children who are already battling to get well," Trump said. "Thank you to all the generous donors for supporting the hospital and thank you to Jack and Barbara Nicklaus for inviting me to be part of this special occasion. I hope the new garden brings renewed strength to each child that visits."

After the unveiling, Trump participated in a butterfly release and visited with patients, according to the White House Press release.

In its statement, the White House said that Trump's visit to the children's hospital was in sync with her "Be Best" initiative. That platform focuses on children in three ways: their well-being, their social media use, and opioid abuse prevention.

"As a mother and as first lady, it concerns me that in today's fast-paced and ever-connected world, children can be less prepared to express or manage their emotions and oftentimes turn to forms of destructive or addictive behavior such as bullying, drug addiction or even suicide," she said at the platform's unveiling.

Trump initially received pushback on her platform's goals — particularly with regard to the social media aspect, given her husband's reputation for using Twitter to taunt and confront those who disagree with him. However, the White House summarily rejected those criticisms. Trump has continued to promote her initiative's goals.

As for the president, he spent part of his Presidents Day delivering a speech at Florida International University, where he addressed the ongoing political crisis in Venezuela. During his speech, he reaffirmed his support for Juan Guaidó, president of the country's national assembly. (Guaidó has declared himself the de facto president of the country and the Trump administration has publicly supported him.) President Trump also used his speech as an opportunity to decry socialism, in general.

“Socialism by its very nature does not respect borders. It does not respect the boundaries or the sovereign rights of its citizens or its neighbors. It’s always seeking to expand, to encroach, and subjugate others to its will,” he said, according to a local CBS affiliate.

With regard to the first lady, it remains unclear what her long-term goals are for her Be Best initiative. But if her past actions are any indication, she'll likely continue to advocate for children's health and safety.

More like this
25 Things I've Reduced My Life To, In Addition To WFH In My PJs
By Ginny Hogan
7 Things We Learned From Rebekah Vardy's First Post-WAGatha Christie Interview
By Sam Ramsden
A Political Thriller Inspired By The Munich Massacre Is Coming Soon
By Darshita Goyal
Why Eurovision 2023's Host City Won’t Be Revealed For A While Yet
By Sam Ramsden and Rachel Mantock
Get Even More From Bustle — Sign Up For The Newsletter