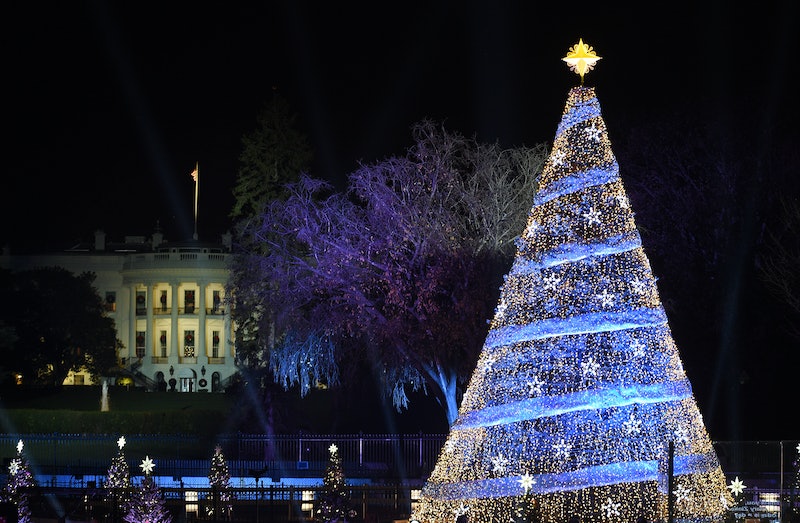 Thanksgiving is officially over, and you can see that the holiday season is in full swing because of the decorations proliferating in cities and neighborhoods all over the country. Perhaps the most anticipated of all of these displays, though, is in the White House. Melania Trump's 2018 White House Christmas decorations are up, and, as pictures show, the space is truly transformed.

“This is a joyous time of year when we decorate the White House for the Christmas Season,” the first lady said in a press release. “Our theme honors the heart and spirit of the American people."

The theme this year is "American Treasures,” and the press release explains it's meant to reflect "the unique heritage of America" and make the White House "[shine] with the spirit of patriotism."

Trump also released photos of the White House Christmas decorations on Twitter, along with a video showing more of the decorations along with sketches from the design process. As the video shows, the decorations include numerous pieces — including a pencil wreath — emblazoned with the logo of the first lady's "Be Best" initiative, which she announced in May to fight for children's wellbeing.

"The People’s House @WhiteHouse is ready to celebrate Christmas and the holiday season!" Trump tweeted along with the video.

Volunteers put up the White House Christmas decorations while the first lady and her family celebrated the Thanksgiving holiday in Florida, as ABC 6 noted.

"Thank you to all the volunteers from across our great nation who are working hard to decorate the @whitehouse," Trump tweeted on Saturday, along with pictures giving a sneak peak of the decorations themselves. "Can’t wait to view it all tomorrow night!"

As the press release explains and the video shows, the decorations this year have little touches representing places across America. On one mirror, for example, there's a cutout of the New York skyline. On one of the ornaments that Trump looks at in the video, you might recognize the Space Needle in Seattle.

"Thank you to the many volunteers and staff who worked hard to decorate the halls of the People’s House in Christmas cheer," the first lady said in the press release. "On behalf of my family, we wish everyone a very Merry Christmas and a Happy New Year.”

Trump has introduced a number of new elements to the White House Christmas decorations this year. The Be Best material is part of that, as ABC News chief White House correspondent Jonathan Karl noted on Twitter. He also mentioned the hall of red Christmas trees, as shown in the photos and the video, and AP White House reporter Darlene Superville tweeted that a wreath on every window of the White House was a new tradition the first lady had introduced.