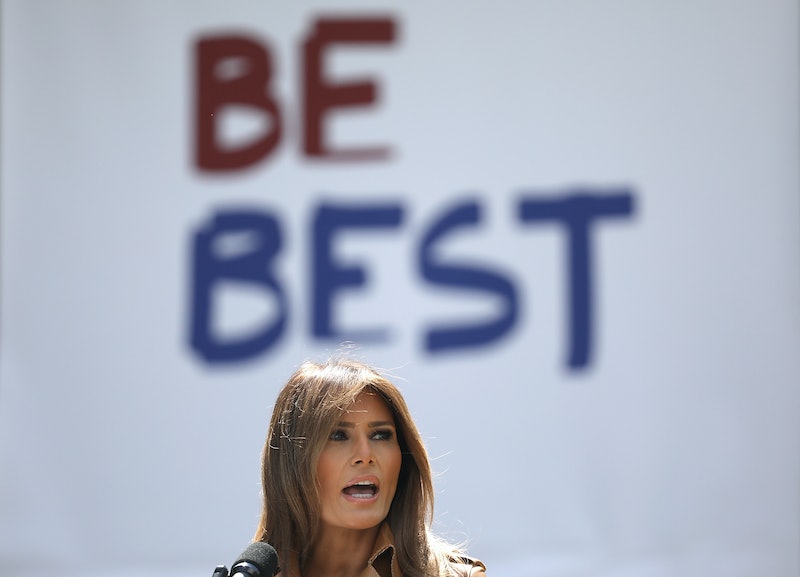 The first lady has weighed in on Samantha Bee's controversial joke about Ivanka Trump, and she isn't happy about it. Through her spokeswoman Stephanie Grisham, Melania Trump denounced Bee's Ivanka joke and accused the "mainstream media" of holding liberal comedians to a different standard than their conservative counterparts.

“The double standard is truly astounding," Grisham said in a statement, according to the Washington Examiner. "Time and again the Trump family and members of this Administration are subjected to false reporting, hateful rhetoric and outrageous lies all in the name of freedom of speech or comedy, yet the mainstream media stays silent."

Despite accusations from the right of a "double standard," Bee's joke about Ivanka Trump received heavy press coverage, and many mainstream media figures denounced her for it. Journalists who condemned Bee for calling Trump a "feckless c*nt" include Chris Cuomo, Brooke Baldwin, Megyn Kelly, S.E. Cupp, Chris Cillizza, Byron York, Sean Hannity, Laura Ingraham, Tomi Lahren, and many others. CNN held a panel discussion on the controversy in which every participant agreed that Bee's joke crossed the line, while CNN anchor John King demanded that Time Warner issue an apology for it.

The first lady hasn't been in seen in public for three weeks, and issued her statement on the Bee controversy through a spokesperson.

White House Press Secretary Sarah Huckabee Sanders issued a similar condemnation of Bee's joke, calling it "disgusting" and demanding that TBS, which airs Bee's show, "demonstrate that such explicit profanity about female members of this administration will not be condoned on its network." Both TBS and Bee have since apologized for the joke.

Bee made her comment in the context of President Trump's immigration policies. After Attorney General Jeff Sessions announced that the administration will be separating immigrant children from their parents when families are detained at the border, the number of unaccompanied minors in immigrant shelters skyrocketed.

“You know, Ivanka, that’s a beautiful photo of you and your child, but let me just say, one mother to another: Do something about your dad’s immigration practices," Bee said on her show before deploying the expletive.

Many on the right compared Bee's joke to the tweets Roseanne Barr sent earlier in the week, which had significant consequences. In a series of posts, Barr compared a black politician to an ape, accused Holocaust survivor George Soros of being a Nazi, and falsely claimed that Chelsea Clinton is married to Soros' nephew. In response, ABC canceled Barr's sitcom and her talent agency dropped her from its list of clients.

Barr subsequently apologized for her comments, which she partially chalked up to having taken Ambien — prompting a harsh rebuke from the makers of Ambien. But although Bee, too, was compelled to apologize, it looks as if her show won't be canceled. This prompted many conservatives to accuse the media of holding liberal and conservative comedians to double standards, as Barr is a Trump supporter. Other pushed back against this, arguing a woman using a gendered slur against another woman isn't comparable to a white person comparing black people to monkeys.

Barr herself hasn't directly commented on the Bee controversy. However, she did retweet somebody who wrote that Bee's apology is "exactly what [Barr] said" after landing in hot water, but that unlike Barr, Bee is "being applauded."

Although it looks like she'll keep her television show, Bee is facing some consequences for her joke. State Farm Insurance and Autotrader both announced on Thursday that they will no longer be advertising on Bee's show in light of her joke, which Autotrader called "offensive and unacceptable."