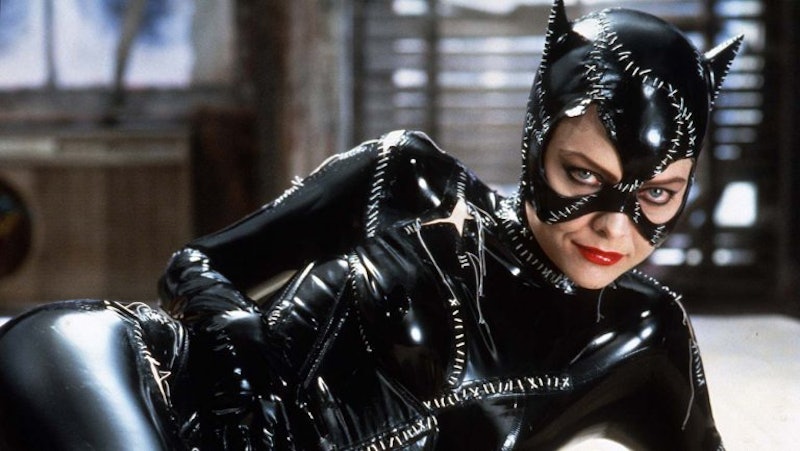 It's been 80 years since Catwoman first came on the scene. In that time we've seen famous actresses like Michelle Pfeiffer, Anne Hathaway, and Halle Berry play the iconic villain. But none of those film interpretations of the character have been as exciting as the one in Melissa de la Cruz's new book, Gotham High. Just in time for Catwoman's 80th anniversary, The Descendants author imagines an alternate version of Gotham City, in which young Bruce Wayne, now the orphaned son of one of Hong Kong's elite, must attend high school with Selina Kyle (Catwoman) and John "Jack" Napier (the Joker) after he's expelled from his private school.

One of a handful of authors invited to work on the DC Ink project, which re-imagines heroes and villains from across the comic-book canon as teenagers, de la Cruz was excited to work on a Batman project, especially one that gave her the chance to give one of the world's most iconic superheroes a background similar to her own. "I’m half-Chinese. My brother lives in Hong Kong,” de la Cruz tells Bustle. “I set the richest, wealthiest enclave in my book in Gotham City in Arcadia, which is where all the wealthy Chinese people [from Hong Kong] moved to in L.A.”

But it wasn’t just Batman that drew de la Cruz to the project. It was also the chance to offer a fresh take on Selina Kyle, eight decades after making her debut in the inaugural issue of Batman. Then, the character went by "the Cat,” but readers have since come to know her as Catwoman, Batman's on-again, off-again enemy and love interest. But for her take on the Gotham universe, de la Cruz wanted the anti-heroine to be about much more than just her sex appeal.

"For me, Catwoman is a vixen. When I think of Catwoman, I think of Michelle Pfeiffer,” she says. “I think I’ve always seen the humanity in her. She’s gorgeous, she’s confident, she’s sexy, but underneath there’s this vulnerability."

Although the central tension of Gotham High comes from Selina being kidnapped, she is decidedly not a damsel in distress. De la Cruz's heroine has a lot of agency, including in her personal relationships. Selina kindles romances with both Bruce and Jack over the course of Gotham High, but the graphic novel doesn't make the teenage romantic rivalry all about Batman and the Joker’s fragile egos. Instead, de la Cruz uses Selina's relationships to examine societal expectations of young women.

"I think sometimes people are uncomfortable with [the way women's strength is depicted]," de la Cruz tells Bustle. "To me, Selina is a very strong person. And sometimes when that’s depicted in fiction, people aren’t comfortable with that, because they want to believe we live in a world where women don’t have to do that."

With its alternate take on Gotham and its addition of some much-needed diversity, Gotham High is a refreshing shake-up to the Batman universe. But its greatest strength is in its retelling of Catwoman’s origin story, which depicts Selina Kyle as the equally strong and vulnerable character she deserves to be. Eighty years after she first arrived on the scene, it’s about time.