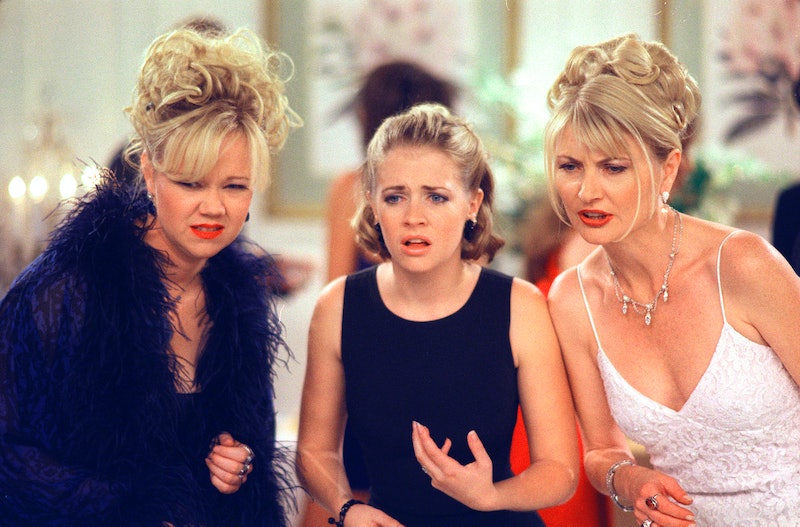 “Last night was a #woohoo kinda night!” Hart captioned the image, referencing her title character’s signature “Woohoo!” phrase. “100 members of our cast and crew got together for a casual hang out and reminisced about all things 90’s, Magic and filling the gaps in the last 17 years.” In one of the various reunion hashtags, Hart wrote, “#harveyandsabrinaforever.”

A coming-of-age comedy that followed a teenage witch as she navigated her magical powers with help from her eccentric witch aunts, Sabrina the Teenage Witch ran for seven seasons between 1996 and 2003 on ABC and, later, the WB. Based on the Archie Comics of the same name, the TV series produced three films: Sabrina the Teenage Witch, Sabrina Down Under, and Sabrina in Rome.

In October 2018, Netflix debuted a Sabrina the Teenage Witch spin-off titled Chilling Adventures of Sabrina. From Riverdale creator Roberto Aguirre-Sacasa, the Netflix adaptation follows Mad Men alum Kiernan Shipka as the titular teen witch in a much darker narrative that hones in on the horror and the occult. The show is currently in its third season.

Aguirre-Sacasa’s version is a stark contrast to the original show. In an interview with Insider last April, Hart revealed that Netflix’s adaptation isn’t really her cup of witch's brew. “It’s a lot more dark and Satanic and sexy than ours was so it’s a very different kind of show,” Hart said. “I think it’s geared towards much more millennial and younger generations. It’s not something I’m going to watch, [or something] I’m interested in watching right now."

The original Sabrina cast has echoed similar sentiments. In a fun segment for Netflix in 2018, Hart, Richert (Harvey Kinkle), Carolina Rhea (Aunt Hilda), and Beth Broderick (Aunt Zelda) reunited to watch the new version and react to some of the more frightening moments. “It’s really scary,” Broderick says in the clip. “I don’t think I can watch it alone.”

More like this
Nicola Coughlan Just Shared A Major Update About 'Bridgerton' S3
By Sam Ramsden
The 'Ugly Betty' Cast Just Reunited In The Best Way
By Sam Ramsden
The First Trailer For 'That '90s Show' Includes So Many Nods To The Original Series
By Jack Irvin, Alyssa Lapid and Grace Wehniainen
Kate Winslet To Star In Russell T Davies' 'Dark Season' Revival
By Sam Ramsden
Get Even More From Bustle — Sign Up For The Newsletter