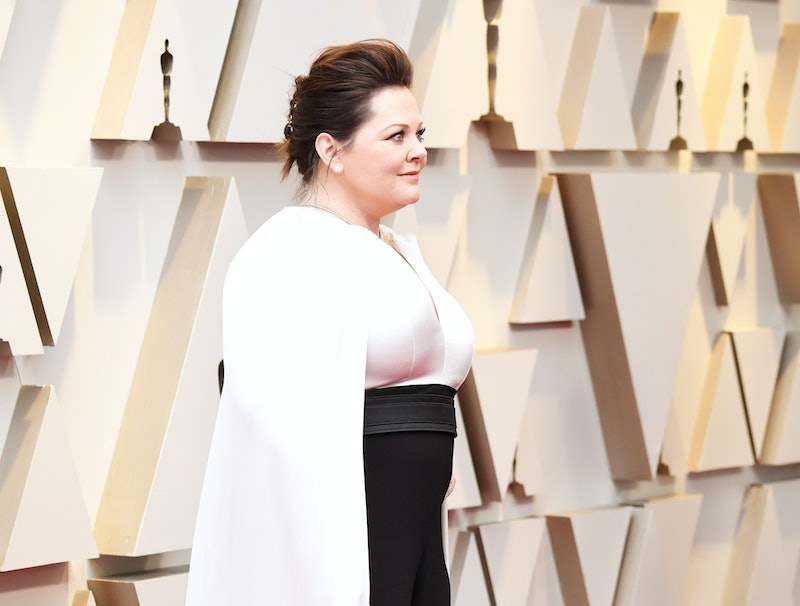 If you've worn heels, you know that they're not always the most comfortable of footwear. Thankfully, there are hacks for that, and one was used on the 2019 Oscars red carpet. At the award show, Melissa McCarthy reportedly used CBD oil on her toes to combat pain from her high heels, and the trick is pretty genius.

According to the E! Live From The Red Carpet special correspondents, McCarthy slathered CBD oil on her toes before hitting the red carpet — presumably to help prevent the pain that can come along with wearing high heels for an hours long event.

The actor, however, isn't alone in trying the hack. According to Page Six, several celebrities have embraced this seemingly easy trick for their carpet appearances. But does it work? The site spoke to Dr. Suzanne Levine who explained that the oil does, in fact, work on localized pain and can reduce inflammation. Perhaps that's why McCarthy isn't alone. The piece cites stars like Mandy Moore and Michelle Williams who are also using CBD as a way to help ease their high heel woes.

Of course, McCarthy's CBD oil is secondary to her ensemble. The actor was one of many women on the red carpet who chose to wear pants instead of a gown. Her black, wide leg trousers rose to her natural waist and featured what seemed to be a cummerbund-esque waistline. McCarthy's top was a solid white with wide, large sleeves and deep neckline.

While you can't see McCarthy's heels, they're apparently there, and they must hurt.

Thanks to that handy CBD oil hack, though, McCarthy could probably walk the carpet free from that pesky toe pain.

The hack of wearing CBD oil for heel pain may have gotten its biggest boost thanks to This Is Us star Mandy Moore. Coveteur was given exclusive access to Moore as she got ready for the 2019 Golden Globes. While preparing for the red carpet, Moore told Coveteur that she would be using Lord Jones CBD oil on her feet thanks to the recommendation of her stylist Erica Cloud. Apparently, Moore and her stylist weren't alone. The site explains that Olivia Wilde uses the same product.

The high heel hack isn't just for celebrities walking the red carpet, though. For an article on Who What Wear, Aemelia Madden tried the trick herself. Ultimately, Madden found that the oil did, in fact, help treat the aches and pains of wearing multiple types of heels. However, she did explain that when it came to blisters, the oil didn't help to prevent them.

CBD-infused products became a massive trend 2018 after the farm bill made growing hemp legal in the U.S. Scientists are generally in agreement that everyone possesses an endocannabinoid system which helps to regulate, you guessed it, pain and inflammation (among other things) — and CBD most likely works quite well with that system. Bustle previously spoke with Richard Kaufman, Chief Science Officer of NanoSphere Health Sciences and Evolve Formulas who explained that CBD works by blocking receptors in the endocannabinoid system which thus blocks users from experiencing pain, including, perhaps, the pain associated with wearing heels.