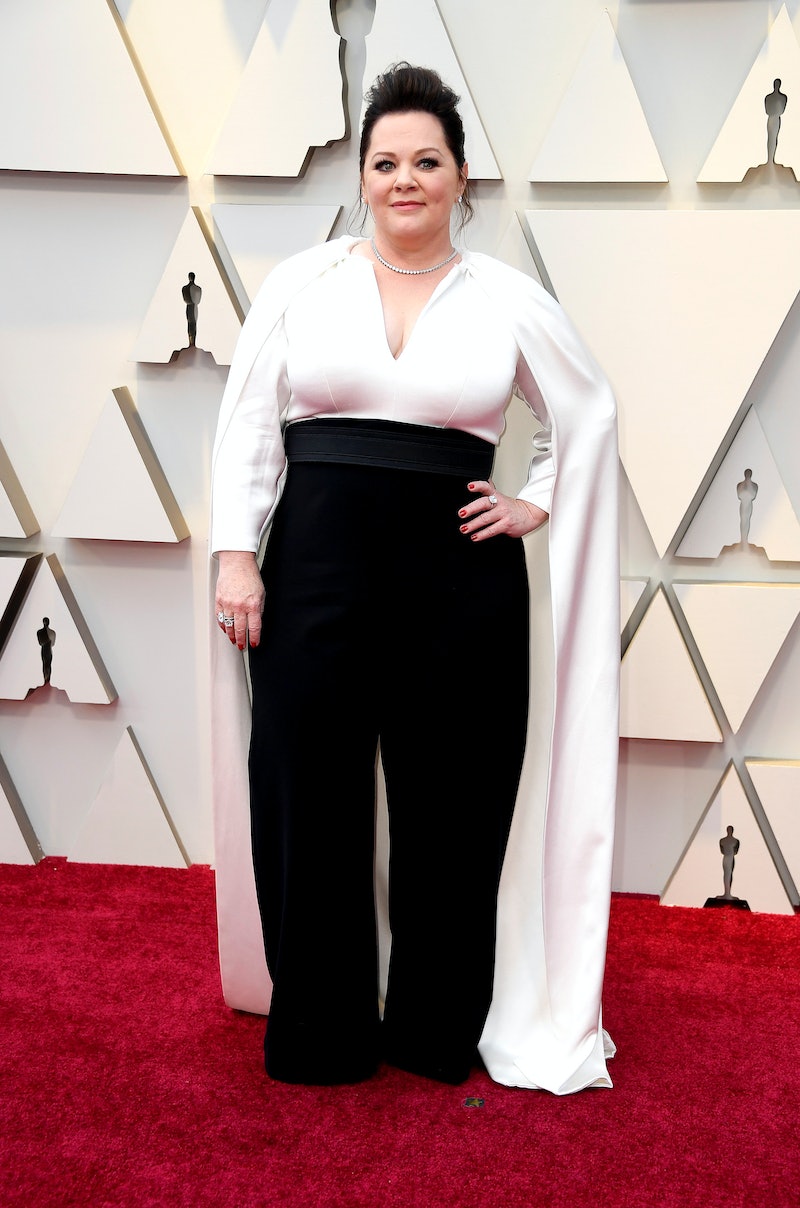 If you have ever wanted to roll up to an important event wearing your sweatpants, one A-lister just gave you permission to do so. Melissa McCarthy wore an Adidas tracksuit to the Oscars after party, ditching the designer duds to walk the red carpet in comfort. While the rest of her peers rubbed elbows wearing slinky dresses and complex evening wear, McCarthy came to party wearing the uniform of mid-day naps and mall walkers. She was an inspiration.

McCarthy was nominated for Best Actress for her starring role as Lee Israel in Can You Ever Forgive Me? While she showed up to the award show dressed to the nines, the after party called for something a little more relaxing. Most celebrities that show up to the Vanity Fair After Party either dressed in their Oscar ceremony attire, or have a costume change to an even more evening-appropriate black tie dress. But McCarthy wasn't alone in the sweatpants decision. Her husband of 14 years, Ben Falcone, dressed up in the same black suit and similar black sneakers.

Falcone is also a comedic actor, and starred alongside McCarthy in Can You Ever Forgive Me? as well as in Bridesmaids, Tammy, and Identity Thief. Entertainment Tonight spotted the two walking down the red carpet, and the anchor pulled McCarthy over and commented on how she opted for something a little less glamorous once the main event was over. "It's not to me, guys. I've doubled my diamonds — I feel great," McCarthy joked.

Not only did McCarthy have diamond earrings and two diamond necklaces, but she also had boulder-sized diamond cocktail rings on, bringing plenty of class to her leisurewear. When the commentator pointed out her sparkle, McCarthy answered, "I'm not kidding around, whatever I had on at the Oscars I doubled. I wouldn't trust me with it."

While the celebrity duo was twinning, their couple outfit differed in small ways. Falcone opted to go sans shirt underneath his tracksuit, while McCarthy's zip-up was accented with a long diamond necklace, giving the look a more evening appropriate twist. When Entertainment Tonight asked whose idea it was to go casual, Falcone pointed a finger at McCarthy, prompting her to explain the unconventional clothing choice.

She said that the pair was discussing if they should change after the awards, and the actress went, "Oh, I have an idea."

Prior that night, McCarthy arrived to the Academy Awards wearing a black and white jumpsuit, complete with a sweeping white cape. She once again opted to forgo the dress option, which was met with much approval on the red carpet.

Case in point: When McCarthy was being interviewed by Billy Porter for ABC, Glenn Close was in the background showing her appreciation. Close stood off to the side, popping her eyes at the sleek ensemble, before narrowing her eyes in approval and leaning her head back the way you would when a solid 10 walks past you.

McCarthy was clearly the best dressed at the Oscars on all counts — from jumpsuit to tracksuit.