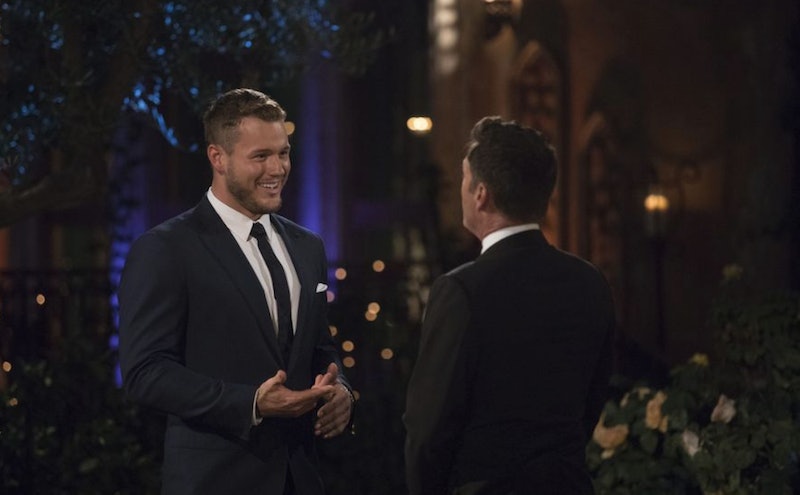 You know that moment at the end of the first trailer for The Bachelor Season 23 where Colton Underwood hoists himself over a fence in one fell swoop as Chris Harrison cries out after him? The moment that left you gasping for air (and wondering if you should go do some pull-ups)? Well, you probably should work up an appetite before The Bachelor premieres on Monday, Jan. 7, because that little snippet of Colton sailing over that fence is only but a taste of what is apparently quite the loaded drama stew. According to the star of the upcoming season of the reality dating competition series, The Bachelor fence jumping scene we saw in the trailer is a big scene for the season.

In recent interviews with Entertainment Tonight and The Hollywood Reporter, Colton called the fence jump “the most pivotal moment” of Season 23. The former The Bachelorette and Bachelor in Paradise contestant also confirmed to THR that the fence jump happened during the Fantasy Suites segment of the season. He revealed,

"Fantasy Suites week was the biggest week in the whole entire journey. The jump was the most emotional and the most physical that I had to be the entire season. I will also say that fence jump is the most pivotal moment. That was a game-changer. That night changed how everything went."

Colton told ET that it is a “very real moment,” adding that the scene “happens towards the end” of the season. “So you’re going to have to watch the thing all way through to see how it happens, and to see how we get there,” he explained. He also told both THR and ET that he “gave production a run for their money, quite literally.”

A run and an incredibly impressive hop for their money. As Chris Harrison (who was “ten yards behind him when it happened”) recalled to Us Weekly in December 2018,

“To the actual athletic accomplishment of the fence jump … you have to understand, the fence was about 6-foot-5, 6-foot-6. He did not touch the fence or touch the top of the fence after his feet left the ground. Go try that! Spoiler alert, I did try it later.”

So far, this season of The Bachelor has gifted us with Colton leaping over a gate in a suit, a contestant showing up to the Mansion in a sloth costume, and a contestant faking an Australian accent. Season 23 hasn’t even premiered yet and it is already one of the most exhilarating seasons in Bachelor history. Forget about swinging for the fences, this season has climbed aboard a trebuchet and launched itself over the fences.